Although the momentum is with India, Steven Smith s men cannot be ruled out of the contest as they have a clean record at the venue.

India and Australia gear up for the second of the five-match ODI series at the historic Eden Gardens Stadium in Kolkata on Thursday. Leading the series 1-0, India will look to yet again dismember the visitors.

Although the momentum is with India, Steven Smith s men cannot be ruled out of the contest as they have a clean record at the venue. FULL CRICKET SCORECARD: India vs Australia 2017, 2nd ODI at Kolkata

Before the curtains are up, let us have a look at the key battles.

Pandya peppered Zampa all over the park in the first match. He collected as many as 24 runs off an over, including three sixes in a row. It is the very over that brought India back into the game.

We all know how mightily can Pandya is, especially against the spinners. Moreover, if he continues to possess the same approach against Zampa, the Australian s spirit will be dented.

Although it is rarely that we see Kohli going for a duck, the script may not be the same. Coulter-Nile may have been lucky, but Thursday could be a whole new story. Kohli will leave no stone unturned to avenge the failure.

Dhoni still has plenty to offer to the Indian side as he rightfully did so in the previous game, scoring a much needed 79 to get the team out of the danger zone and allowing them to recover from the poor start. However, he was dismissed by James Faulkner in the last over of the innings. That being said, both are equally good in the death overs.

Every time I bowl to him [Warner], he is under pressure while facing me, said Kuldeep ahead of the game. It is one of those rivalries building up when a player fails to perform against any particular player on multiple occasions. Kuldeep has got rid of Warner, in both Tests and ODIs.

Kuldeep has already said that he does not fear bowling to Warner and has plans set for him in the upcoming ODIs. The question now is how does Warner prepare himself to tackle the Chinaman, or we may see another chapter of his woeful rivalry with him.

The Australian skipper cannot be left out of the debate at any cost. Smith is arguably one of the finest batsmen in the current Australian side. However, it is his captaincy which is under fire. Although he failed to fire in the previous tie, it won t be long before he fires back, and Thursday could well be it.

Former skipper Michael Clarke on Tuesday said, Smith needs to define the way for his team to have success.

We all know how dangerous can Glenn Maxwell be in the subcontinental conditions, thanks to his regular and successful stints in the IPL. He was a threat in the previous tie as well when he smashed an 18-ball 39, giving the Australians some hope of winning the rain-curtailed tie. He smashed three fours and four sixes, with a strike rate of 217.

However, it was wrist spinner Yuzvendra Chahal, who managed to calm the Maxwell storm, therefore ruining Australia s chances to draw first blood in the series. Chahal was tipped to make an impact with his spin as he rightfully did so. However, Maxwell does not like under-performing against India, especially in the Indian conditions. Therefore, Chahal might have made Maxwell more aggressive, but the latter must stay calm enough and tackle him tactfully. Chahal has the ability to generate spin on any track, and Eden being a slow track traditionally, could once again turn out to be his yard. 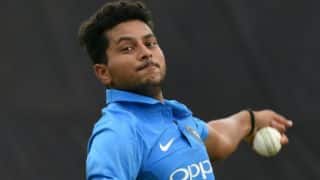