1 win needed by India in this series to clinch their third consecutive bilateral series win against Australia.

12 Indian cities now have multiple international grounds. Guwahati is the latest addition to the list, which is headed by Mumbai (3 grounds). Barring Guwahati (where Nehru Stadium has hosted 14 ODIs), the other cities are Ahmedabad, Chandigarh, Chennai, Delhi, Hyderabad, Indore, Lucknow, Nagpur, Pune, Rajkot, Vadodara, and Visakhapatnam.

1 win needed by India in this series to clinch their third consecutive bilateral series win against Australia. Australia have won only 1 out of 5 bilateral contests till date a one-off encounter in 2007-08 at home.

10 wins by India against Australia now, the joint second-most in history by any side against any opposition. Australia have won 11 T20Is against South Africa, as have South Africa against New Zealand and West Indies against England. India are now tied with Pakistan, who have won 10 matches against Sri Lanka.

8 T20Is played by Yuzvendra Chahal without batting once, the second-most in history. Stuart Clark (9) heads the list.

12 wickets for Chahal in 2017, the joint-fourth highest this year. Rashid Khan and Kesrick Williams lead the list with 17 apiece, while Imran Tahir has 14. Carlos Brathwaite, Shadab Khan, and Lasith Malinga are on 12 as well.

38 runs needed by Virat Kohli to become the second-highest run-scorer in the history of T20I cricket. Kohli, on 1,852 runs, is only behind Brendon McCullum (2,140) and Tillakaratne Dilshan (1,889).

116 runs needed by Rohit Sharma to become the second Indian to 500 T20I runs. Kohli was obviously the first.

4 dismissals needed by MS Dhoni to top the list in T20Is. Dhoni (67) is behind only AB de Villiers (70). Dhoni leads the list for wicketkeepers, since de Villiers took 42 of these dismissals as a fielder.

26 T20Is played by Jasprit Bumrah without scoring a run, the leader by far. Krishmar Santokie and Jeetan Patel are way back, on 12 each.

0.4 Australia s win-loss ratio against India from 14 T20Is (4 wins, 10 defeats), their worst against any side with 2 or more encounters. They have, of course, lost their only match against Zimbabwe. 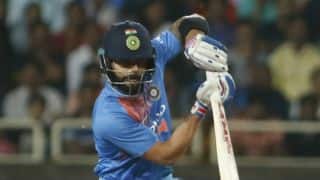