You could argue that despite their No. 1 Test ranking, India make for poor visitors in Test cricket. That holds true for nearly every team in the format. Australia are no strangers to that argument either, having returned recently from a series defeat to Pakistan in the UAE. On that occasion, it was down to the absence of Steven Smith and David Warner, Australia s run machines who have been serving year-long suspensions.

The series defeat in South Africa prior to that, a new captain at the helm and having to look for replacements for their captain-vice captain duo notwithstanding, Australia s bowling has never quite been off-colour, as India found out on the opening day of their four-Test series in Adelaide. Despite winning the toss and electing to bat, Virat Kohli s men succumbed to the constant pressure mounted by Australia s three quicks, and Nathan Lyon plugging away from one end meant India closed the day on 250 for 9, far from a 400-plus effort they would have been hoping for.

The day may have been dominated by poor shot selection from India s much-vaunted top order, but discounting the effort put on by Mitchell Starc, Josh Hazlewood and the hugely impressive Pat Cummins would be foolish. Australia s pitches have always aided batting, but their bowlers have always impressed. The reason: the ruthlessness Kohli talks about in press conferences was put into practice by Tim Paine s tireless bowlers and the generousness shown by India s batsmen.

Save for Cheteshwar Pujara s superlative 16th Test century, none of India s batsmen spent enough time at the crease to build an innings. While the top three went chasing full deliveries without their feet moving enough, the middle order crumbled in a bid to release pressure, brought on by the exceptional lines and lengths Australia s bowlers stuck to throughout the course of the day.

Players from both teams have come out and spoken about the need to stay aggressive on the field, and Mitchell Starc and Josh Hazlewood came out with precisely those intentions. Australia had indicated in the lead-up employing a fuller length to attack the Indian batsmen early, Hazlewood struck in his first over to remove KL Rahul, who was driving without having reached the pitch of the ball.

With pitches in Australia offering more bounce, bowlers tend to get away with fuller deliveries batsmen would otherwise climb onto. And with swing on offer, Starc had Murali Vijay caught behind attempting another ill-advised drive. And when Pat Cummins had the India captain dismissed to a stunning one-handed effort from Usman Khawaja at third slip, India had slipped to 19 for 3 in the 11th over of the day s play.

This was the second occasion Cummins has accounted for Kohli, the first coming in 2017 away to India in the third Test at Ranchi, highlighting the bowler s comeback into Test cricket after a string of injuries early in his career. Despite Paine using all his quick bowlers in short bursts and all three of them sharing the spoils, Cummins has impressed once again. The last time he took a five-for, it was overshadowed by the ball-tampering incident in South Africa.

The fuller lengths notwithstanding, one look at Pujara s scoring areas will tell you how difficult run scoring was on a hot day at the Adelaide Oval, which made the role of Nathan Lyon even more crucial on the first day of a Test series. The last time these two teams went head-to-head at the same venue, Lyon had starred with the ball with 12 wickets, and had another eight-for in Bangalore when Australia toured India.

Lyon s most remarkable trait, apart from being able to bowl long spells with the same intensity, has been the amount of revs, flight, drift as well as overspin he is able to generate despite bowling fairly quick for a spin bowler. Rohit Sharma s failure to make the transition from the limited-over formats to Test cricket is now famous, and his eagerness to go after the bowling even here brought about the question of not if but when he would be dismissed. He went for a shot too many against Lyon, who promptly shortened his length and had the India No. 6 caught in the deep for 37, at a time when India had just begun to string together a partnership. Rishabh Pant arrived in Test cricket with a similar zeal, and after putting on a quick 25, also perished to the off-spinner.

Cummins and Starc returned to remove Ashwin and Ishant Sharma, but their dismissals meant Pujara had to take a few risks to get to three figures in an innings that was more becoming of a batsman willing to succeed in Australia. In England too, Pujara had scored a similar hundred, only to see the rest of the batting collapse from the other end.

Paine would have been happier to have had bowled India out on a much successful day for his bowlers, where the visitors only positive was getting to 250. Back in home conditions after a difficult few months on the road for a team in the process of rebuilding, Australia s bowlers stood up and have provided a platform for their batsmen to build on, to make a winning start to what will be a career-defining series for many. 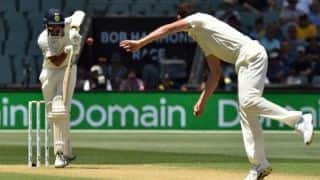