Virat Kohli's team can retain the Border-Gavaskar Trophy with victory over Australia in Perth.

Virat Kohli s Indian cricket team has made history by becoming the first team to start a tour of Australia by winning the first Test of a series, having emerged victorious by 31 runs on Monday at Adelaide Oval to go up 1-0 in the four-match series.

This win marked a rare achievement in 72 years of Indian cricket teams visiting Australia, and was the first time since December 2006 in South Africa that any Indian side began a tour of the SENA (South Africa, England, New Zealand, Australia) countries by winning the first Test.

ALSO READ: Adelaide Test victory one to savour, but much to ponder for India

India now meet Australia on Friday at Perth s Optus Stadium – making its debut as a Test venue – with a chance to retain the Border-Gavaskar Trophy via an unassailable 2-0 lead. If India go on to win the series, it will mark their first ever on Australian soil.

How many times has a touring Indian team won a Test series? Let s recap.

The first time a touring Indian team won the first Test of a series was in February 1968 when MAK Pataudi s men beat New Zealand by five wickets in Dunedin. That victory put Pataudi s team on the way to a landmark 3-0 sweep of New Zealand which was the first away from home for India.

In 1971, Ajit Wadekar famously captained India to their maiden Test series wins in the West Indies and England – achievements which ushered in a new era in Indian cricket and rightfully earned him his place in the pantheon of the country s finest. First came the famous 1-0 victory in the West Indies, in which a rookie Sunil Gavaskar racked up a record 774 runs at 154.80 in his first taste of Test cricket, followed by the victory in England with history created at The Oval on a glorious summer day.

This win made it three successive overseas Test victories for India.

It would be 15 years since India next won a Test series on the road. At Lord s in June 1986, Kapil Dev led India to victory over England by five wickets in a series that they went on to win 2-0.

In 1993, Mohammad Azharuddin led India to Sri Lanka and won 1-0 which is his only series win outside the country. Seven years later, India beat Bangladesh in the country s Test debut in Dhaka.

In 2004, Sourav Ganguly s Indian team won in Pakistan 2-1 for the country s first Test series win against their arch rivals in their own backyard. As the year closed, Ganguly s team went to Bangladesh and won 2-0. In 2005, India had few troubles beating Zimbabwe in Zimbabwe 2-0. In 2006, under Dravid, India won in the West Indies for the first time since 1971. Dravid went on to lead India to 1-0 in Bangladesh and 1-0 in England, which was the first Test series win for any Indian team since 1986.

All told, that is 18 overseas Test series triumphs in 82 trips away from home. 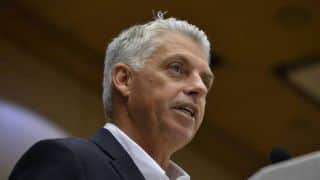 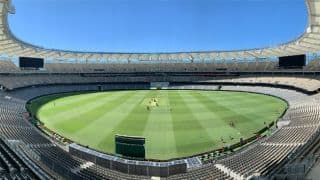