India will not be happy that they let the Australians get as close as they did, but will look for a comprehensive performance.

Buoyed by a historic opening Test victory at Adelaide, a confident Indian side will look to extent their lead in the four-match series when the second Test against an under-pressure Australia gets underway at the new Optus Stadium in Perth hosting its first Test ever on Friday. Both teams will have to make a quick turnaround for the Perth encounter coming three days after the Adelaide contest.

Australia, who showed great resolve to stage a fightback in the second dig falling short by 31 runs, were helped purely by the tail in the second essay with Nathan Lyon, who picked up six wickets in the second innings left unbeaten on 38.

ALSO READ: How many overseas Test series have India won? Here’s the answer

India, the No. 1 ranked side in the world, will not be happy that they let the Australians get as close as they did, but will look for a comprehensive performance. The visitors know for certain that Tim Paine and Co. will come hard at them with Lyon licking his lips to exploit the bounce on offer at Perth. A cracking contest awaits!

What: India vs Australia, 2nd Test

India were dealt with a major blow on the eve of the Perth Test with Rohit Sharma and Ravichandran Ashwin adding to the injury list with Prithvi Shaw still on the road to recovery after injury his ankle. India will retain their opening combination of Murali Vijay and KL Rahul.

This week, the gauntlet has been on Mitchell Starc, who, despite taking five wickets at Adelaide, has lacked that energy in his bowling. It s been a pretty ordinary year for Starc, who has picked 24 wickets in nine matches. The left-arm pacer has gone for more than three runs per over in 13 of his last 16 innings.

With the Perth wicket assisting pace and bounce, time will be right for Starc to turn things around. Australia named an unchanged side meaning Aaron Finch gets another shot to prove his credentials as an opener. Key for Australia will be the performance of Lyon, who will look to exploit the bounce on offer at Perth.

“We certainly get more excited than nervous looking at lively pitches now. We understand that we do have a bowling attack which can bowl the opposition out as much as they are convinced about their attack.” — India captain Virat Kohli 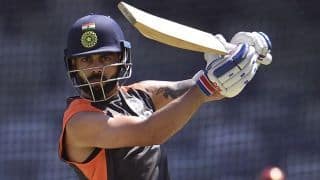