India s head coach Ravi Shastri and bowling coach Bharat Arun – once India team-mates – believe that the current fast-bowling pool that the Indian cricket team has is the best in the country s history.

Shastri stated this during the tour of England this summer, and on Wednesday in Perth ahead of the second Test between India and Australia, Arun echoed the same sentiment. His comments came two days after India beat Australia by 31 runs in Adelaide to take a 1-0 series lead, the first time any Indian team has managed to do so.

Ishant, the most-capped player in the current squad, is India s third most successful fast bowler after Kapil Dev (434) and Zaheer Khan (311) with 259. Shami is fourth – Javagal Srinath with 236 separates Ishant and him – with 133 from 37 Tests. Right behind him is Umesh with 117 from 40.

Bhuvneshwar is 14th on the all-time list of Indian pace bowlers, having claimed 63 wickets from 21 Tests. In seven Tests, Bumrah has 34 wickets at 24.44 apiece. Throw in the injured Hardik Pandya, who can bowl 140kph and has taken 17 wickets in 11 Tests as the seam-bowling allrounder, and this makes for a very good attack.

These five pace bowlers have been rotated throughout 2018 and done well, with South Africa bowled out in each of the three Tests in January and England losing all 10 wickets on seven of nine occasions this summer. At Adelaide Oval, the trio of Ishant, Shami and Bumrah all made telling impressions in a famous win.

In a country known for its rich legacy of spin bowling – the fabled quarter of Bishan Bedi, Erapalli Prasanna, BS Chandrasekhar and S Vengataraghavan, followed by India s leading wicket-taker in Anil Kumble and later Harbhajan Singh and R Ashwin – fast bowlers were a rarity until recent years.

From the time of the tearaway Amar Singh in the 1930s, the next big thing was Kapil who claimed 434 wickets without enough support, backed in spurts by medium-pacers such as Madan Lal, Chetan Sharma and Roger Binny. In the 1990s, Srinath and Venkatesh Prasad (96 wickets in 33 Tests) proved a handy pair with supporting roles from the likes of Manoj Prabhakar (96 in 39), Abey Kuruvilla, Ajit Agarkar and Sourav Ganguly.

In the 2000s there was none like Zaheer who took 311 wickets with his left-arm pace, at an average of 32.94 and strike-rate of 60.4. Irfan Pathan is the third left-arm Indian pacer after Zaheer and Karsan Ghavri to make 100 wickets. Agarkar was quick when he broke into international cricket but only played 26 Tests. Ashish Nehra played 17. The likes of Munaf Patel and RP Singh promised plenty but faded away.

The names of Kuruvilla, Abhimanyu Mithun and Varun Aaron elicit images of bowlers with proper physiques who could not cut it at Test level.

So yes, the pace attack of Ishant, Bumrah, Shami, Bhuvneshwar and Umesh – with Pandya in the wings – can indeed be termed the best ensemble of Indian pace bowlers and with plenty of success to come. 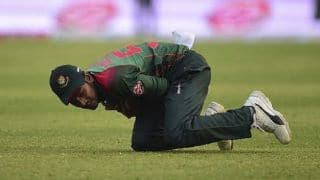 We will seek inspiration from away series win in West Indies: Mehidy Hasan