From Finch's continued slump to Jadhav's finishing, the key chapters of the third ODI.

A seven-wicket victory at the MCG to seal the series 2-1 on Friday made Virat Kohli the first Indian captain to win a Test and ODI series in a single tour of Australia. Chasing 231 after Yuzvendra Chahal s career-best 6/42, India lost Rohit Sharma and Shikhar Dhawan early and then Kohli for 46, but a 121-run stand between MS Dhoni dropped first ball and Kedar Jadhav took them home in 49.2 overs. (ALSO READ: Dhoni, Jadhav seal ODI series win after Chahal s six)

Here are five talking points from the third ODI:

1. Bhuvneshwar gets his bunny Finch again

Australia s limited-overs skipper Aaron Finch is in the middle of a batting funk, and Bhuvneshwar Kumar has his number like few bowlers have in ODIs. Finch s dismissal to Bhuvneshwar for 14 on Friday was the third ODI in a row that he s fallen to the seamer this series, and lowered his batting average in one-day cricket since Australia resumed playing in November to 13.83.

In the first two ODIs, Finch was bowled by Bhuvneshwar for scores of 6 and in the third he was out lbw for 14 to end his series returns against the seamer to three dismissals in 37 balls, from which he has scored 16 runs for an average of 5.33. Tellingly, of the 37 balls from Bhuvneshwar that Finch has faced, 30 have been scoreless. (ALSO READ: 6.1 overs, 30 dot balls, three dismissals)

Chahal, introduced in the 24th over of Australia s innings, made immediate impact removing the in-form Shaun Marsh courtesy a superb stumping by Dhoni off his second ball and then foxed Usman Khawaja into a fatal leading edge. In his fourth over, Chahal flighted squared up Marcus Stoinis who edged to slip, and in his second spell accounted for Petr Handscomb and Adam Zampa to end with six, for which he was named Man of the Match.

Three dropped catches and two missed run out attempts gave India’s primary batsmen lives that in the end result proved defining for Australia. The most glaring was Glenn Maxwell’s drop of Dhoni first ball, when the batsmen cut Stoinis in the air to point. It was a simple catch that Maxwell dropped to his left. Later, Handscomb dropped Kohli at slip off Billy Stanlake and in the death overs, Dhoni, on 74, drilled a ball to mid-off where Finch stuck out two hands while moving to his left but could not hold on.

There were two runs missed too, one each that allowed Kohli and Dhoni reprieves.

His place in India s batting order often under criticism with dwindling returns of the last two years, Dhoni was named Man of the Series for three consecutive half-centuries. Chasing 231, India accomplished their target with four deliveries left in the game with Dhoni scoring an unbeaten 87 from 114 balls, this time from the No 4 spot.

5. Is Jadhav India’s next finisher?

Playing his first international match since November 1, Jadhav stepped up with a superb innings to help Dhoni take India to victory. His unbeaten 61 from 57 balls was an equally effective innings, one punctuated by some brilliant running and ability to bring out the boundary shot when Dhoni showed signs of flagging.

In successful ODI chases, Jadha now averages 50.83 in 10 innings, with one century and two fifties. If he stays injury-free, his role at the 2019 ICC Cricket World Cup looks vital. 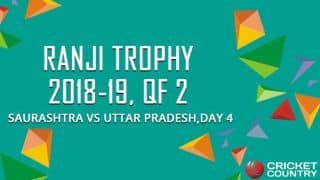 Saurashtra steady in chase of 373 vs Uttar Pradesh 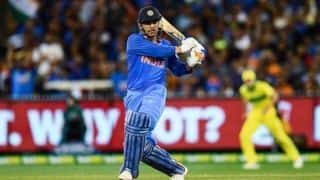 Have seen Sachin Tendulkar get angry but not MS Dhoni, says Ravi Shastri