Rohit and Dhawan put on 193 in Mohali, which is India's highest versus Australia.

The opening pair of Rohit Sharma and Shikhar Dhawan has become India‘s second most successful in ODIs, having moved past the tally of 4387 runs scored by Sehwag and Tendulkar as an opening act.

Rohit and Dhawan, during their stand of 193 against Australia in Mohali on Sunday, took their overall aggregate to 4526 runs which is now only behind Tendulkar and Sourav Ganguly’s record of 6609. (SCORECARD: INDIA vs AUSTRALIA, 4th ODI)

Tendulkar and Ganguly opened together in 136 innings, averaging 49.32 as a pair with a highest partnership of 258.

Tendulkar and Sehwag averaged 42.13 together with a best of 182.

Sunday’s alliance of 193 in the fourth ODI is the best for India against Australia, surpassing the 178 that Rohit and Dhawan put on in 2013.

It it also Rohit and Dhawan’s seventh in excess of 150, and second best overall behind the 210 they put on during the 2018 Asia Cup. 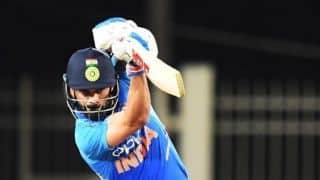