Australia won their first T20I against India since 2012.

India probably went in as favourites in the second T20 International of the 3-match series at the new Barsapara Stadium, Guwahati. Australia had, after all, won 1 of the 6 matches on the tour. Unfortunately, India ran into Jason Behrendorff, and were soon reduced to 27 for 4. They never really recovered, and were bowled out for 118 despite two partnerships of 33 each. Australia lost both openers early, but Moises Henriques and Travis Head added an unbeaten 109 to see them through. In the end they won with 27 balls in hand and levelled the series 1-1. Here, then, are some highlights from today s match:

Jason Behrendorff s quadruple-blow: Behrendorff had bowled a solitary over at Ranchi. When David Warner threw the new ball to him again, he started with a terrible ball. He conceded 2 fours in the first 3 balls. His next five balls saw three wickets: he swung two balls in to trap Rohit Sharma and Virat Kohli leg-before, and had Manish Pandey caught-behind and Shikhar Dhawan caught brilliantly at long-off. At one point his figures read 3-0-16-4 4 fours and 4 wickets. He eventually bowled 17 dot balls out of 24.

Virat Kohli s first duck: It took 52 matches and 48 innings for Kohli to fall for a duck in T20Is. He did consult Dhawan before walking off. His previous lowest score was 1, against South Africa at Cuttack in 2015-16.

David Warner s super-catch: Dhawan, perhaps in an effort to break the shackles, decided to hit Behrendorff over mid-off. It was a calculated risk, for mid-off was well in. Unfortunately, he had probably underestimated the skills of his Sunrisers captain: Warner ran and ran backwards for what seemed like an eternity; he kept his eyes on the ball; and eventually took an excellent catch.

Adam Zampa conquers MS Dhoni: Zampa s first over went without much fuss. Dhoni tried to force proceedings by stepping out in Zampa s second over. Zampa bowled one short, forcing him to adjust his stroke. Dhoni swatted the next ball to cowshot corner for four. He stepped out again, and Zampa slid in a wide but Dhoni was alert enough to get back. The next ball was straight: Dhoni stepped out, was beaten in flight, and the ball turned enough to beat the bat; Tim Paine did the rest.

Kedar Jadhav s cameo: Jadhav s 27 may not look big, but he scored more than anyone else in the side. He had to assume the dual responsibility of getting runs and staying out there. He did a decent job of it before going for an ugly hoick and losing his wicket to a googly from Zampa.

Tim Paine s brilliance: There were wides and edges, but Paine was more than competent. He flung himself to either side, preventing byes. The fours that came off edges were beyond his reach. He was efficient, took two catches, stumped MS Dhoni, and ran Jasprit Bumrah out in the last over.

Indian spinners lose grip on match: India probably chose the wrong match to play two wrist-spinners. On a track with an unmistakable green tinge and under conditions where the ball became difficult to grip, Kuldeep Yadav and Yuzvendra Chahal both struggled. Perhaps India could have played Ashish Nehra instead of one of them.

The Travis Head-Moises Henriques show: India began their defence of 119 on a high. David Warner and Aaron Finch fell within 13, exposing the middle-order that has not stood up very often of late. Henriques and Head rose to the challenge. Head was more confident to begin with. Henriques looked shaky against the new ball but grew in stature, and once the spinners came on, both were brutal. Both men registered their career-best scores, though Head would probably have wanted those two runs that would have given him his maiden fifty. 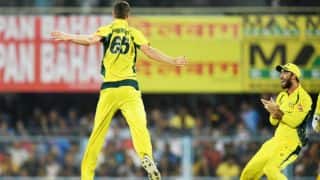