India edged past Australia by 75 runs in second of the four-match series, levelling it 1-1.

India beat Australia by 75 runs in the second of the four-Test series at Bengaluru’s M Chinnaswamy Stadium. KL Rahul was awarded Man of the Match for his knocks of 90 and 51 on a track that saw Virat Kohli and Steven Smith score 59 runs combined. Above all, Ravindra Jadeja, Josh Hazlewood, and Ravichandran Ashwin took a six-wicket haul each. Before that, Nathan Lyon devoured India with his 8 for 50, registering the best figures for a visiting bowler in India. To matters more demanding, he failed to take a wicket in the second innings, becoming the 10th bowler to take a double of 8 wickets in one innings and none in the other. While we rate Lyon 7 out of 10, let us check how others fared in this gruelling contest. Full cricket scorecard: India vs Australia, 2nd Test at Bengaluru

KL Rahul (10/10): Rahul himself would not agree with this generosity. At presentation ceremony, he agreed to the fact that he should have gone on to convert the starts into three-figure mark. However, there is reason Rahul is the only 10-pointer in this report card. He scored 90 out of India’s 189 runs in the first innings, and he was India’s 9th wicket to fall despite opening the innings. In the second essay, he scored 51, his third half-century of the series. He is now the highest scorer of the series, with 215 runs at 53.7.

Abhinav Mukund (1/10): He donned India’s jersey almost after 6 years, and scored a duck in his comeback match. In the second, he hit a six but that flew off the top edge. Neither did he bowl.

Given he had dropped Steven Smith in the Pune Test as substitute fielder, he was not seen fielding at forward short-leg. That job was assigned to Karun Nair instead. Eventually, Mukund did not even take a catch. He gets a point for working hard in the domestic circuit and making to the starting XI of No. 1 Test team.

Cheteshwar Pujara (8/10): He played 66 deliveries in the first innings, but churned out only 16 off them. He inside-edged a delivery to forward short-leg. However, he made amends in the second essay. The reason he loses two points is because he was dropped twice. Otherwise, he made sure India stay on course, scoring a match-winning 92 amidst a Josh Hazlewood six-for. India vs Australia 2nd Test: Highlights from hosts 75-run series-levelling victory at Bengaluru

Virat Kohli (4/10): He failed with the bat in both innings, but succeeded in keeping his team’s morale high even in the toughest of times. He gets extra marks for being honest at the press conference, answering Mark Waugh and Ian Healy’s criticism with swag.

Ajinkya Rahane (6/10): He dropped a tough chance at gully. He struggled against spin in the first innings. But like Pujara, he compensated for his failures in the second essay. He stitched a 100-plus partnership with Pujara and added vital 52 runs to the total.

Karun Nair (4/10): His positive approach in the first innings when Indian batsmen were stuttering gave his team some respite, but played an uncharacteristic stroke to perish. In the second innings, he could do very little with Mitchell Starc’s in-swinging delivery. He was sent packing on a duck. Otherwise, he took 2 catches.

Ravichandran Ashwin (7/10): He could not use his batting skills to good effect. To make matters worse, he could take only 2 wickets off 49 overs in the first innings. But he is Ashwin, No. 1 bowler in ICC Test Rakings. He scalped his 25th five-wicket haul in the second innings, equalling Harbhajan Singh’s tally of five-fors.

Wriddhiman Saha (6/10): He gets 4 points for scoring crucial 20 runs to set a target of 188. He scored a six and a four off Starc when India were 9 down. And he gets two points for taking a stunner to dismiss Peter Handscomb. He loses the rest for getting succumbed to pressure in India’s first-innings collapse. India vs Australia 2nd Test: Highlights from hosts 75-run series-levelling victory at Bengaluru

Ravindra Jadeja (8/10): Only Kohli would tell why Jadeja was under-bowled in the first innings. He had dismissed Warner in his first 5 overs, which came in India’s 62 overs. Nonetheless, he went full throttle when he came for his third spell. He ended up taking a six-wicket haul. In the second innings, he bowled 8 overs conceding 3 runs and 5 maidens, with a wicket to his name.

Umesh Yadav (6/10): Umesh bowled as well as Hazlewood did. He reverse-swung the ball as viciously as Hazlewood did. But he could not take as many wickets as Hazlewood did. However, he dismissed Shaun Marsh in both the innings, though the one in second innings was more of Steven Smith’s than Umesh’s, for the Australian captain refused to take a review of a dismissal that missed the off-stump by a reasonable margin. Nonetheless, Umesh was accurate enough to keep Australia at bay.

Ishant Sharma (6/10): He took a wicket less than Umesh, but gets as many marks for mimicking Smith and the becoming a viral meme on the internet. Above all, Ishant scored crucial 6 runs to extend the target to 188 runs, including a sweep off Lyon.

David Warner (4/10): For someone whose recent exploits in Tests before this series were influential, Warner s failures have hurt Australia. After two Tests, Warner averages a mere 24.50. There have been starts in three out of four innings but big runs have eluded Warner. On a tricky Bengaluru wicket, Warner got starts but scored a total of 50 runs in the Test 33 in the first innings and 17 in the next. Warner has brought about changes in his approach to Test cricket in India, but none of that has worked so far.

Matthew Renshaw (5/10): Renshaw was sledged all along in the first innings wherein he batted with grit and application to score 60 off 196 balls. Australia s plan was to bat for as long as possible and credit must be give to the 20-year-old for sticking to them. Renshaw s was a key wicket for India as he was capable of dropping anchor and making the others bat around him, but his match ended when he nicked one behind, off Ishant Sharma. IND vs AUS 2017, 2nd Test, Day 4: Smith’s controversial DRS – Twitter Reaction

Steven Smith (3/10): A lot was expected from Smith, possibly the greatest Test batsman among his peers. He got off to impressive starts in both the innings, but scored 8 and 28, far from what he is capable of. It did not look like Smith was ready when he dropped Cheteshwar Pujara on 4 at the first slip in India s second innings. Australia paid a heavy price for their captain s error.

He indulged in funny exchanges with Ishant Sharma that diffused the tension when it was at its extreme on the second day. But on-field sledging along with the confusion surrounding Shaun Marsh s dismissal in Australia s chase of 188 and his brain fade on his own turn showed the captain in poor light.

He marshalled his troops well, but on-field sledging, him looking up to the dressing room for DRS and letting India get away in the third session on Day Three will remain low points for him after a perfect start to the series.

Shaun Marsh (5/10): Marsh put in all his experience to carve out a fine 66 in the first innings, but a horrible confusion in the second innings over deciding whether to take DRS was embarrassing. Marsh was asked go for a review by Smith after he offered no shot and was given leg-before; he walked back to the pavilion instead.

Peter Handscomb (3/10): Handscomb played two cameos (16 and 24) but could not convert either to big innings. The significant contributions he made in the Pakistan series had set him up well, but Handscomb seems to have lost the momentum. Having said that, he batted sensibly during Australia s chase, and his application and approach on a tough wicket at Bengaluru signals something special could be in store. Steven Smith: Bengaluru Test vs India was a great Test match

Mitchell Marsh (0.5/10): Facing perhaps the toughest time in his career, Marsh s position will come under heavy scrutiny after two poor batting performances and a total of 5 overs in the Test. At some point Australia have to realise that he is not the all-rounder they need, and the sooner they realise the better. Having said that, he redeemed himself a bit with a brief counterattack in the fourth innings, but that is unlikely to be enough.

Matthew Wade (4/10): For someone with not much of batting credentials in these conditions, Wade scored a brisk 40 in the first innings. Unfortunately, lack of runs in the second innings, crucial mistakes behind the wickets (including a lifeline to Pujara early in his innings) was unpardonable.

Mitchell Starc (5/10): Starc continued to enjoy this India sojourn but made a few mistakes in this clash. In his first 10 overs in the second innings he ended up giving away 45 runs, which marked a strong Indian comeback with the bat. However, a two-wicket burst on the fourth morning of the Test with the new ball sparked India s collapse for the fourth time in the series. Starc also scored a few important runs in the first innings, but fell to the pressure in the next.

Steve O Keefe (4/10): In spite of a magical first Test, O Keefe stayed away from limelight as Australia battled hard to remain ahead in the series. O Keefe bowled to a tight line, but remained unfortunate to not get enough wickets. His batting credentials can be better than his returns in the two innings.

Nathan Lyon (7/10): Lyon s figures of 8 for 50 are the best figures by any visitor in India. He showed great skills in the first innings, extracting sharp bounce on a damp Day One wicket. However, a poor second-innings show ruined his match figures.

Josh Hazlewood (5/10): The dual-natured wicket at Bengaluru had something for everyone, and Hazlewood showed how good it was for fast bowlers in the second innings. He cleaned up Abhinav Mukund with a slightly old ball and rattled India when he trapped Virat Kohli leg-before with a delivery that kept low. He found the gap between Ravindra Jadeja s bat and pads, knocking out the middle-stump, and ended Pujara s 221-ball vigil. He also got Ravichandran Ashwin and Umesh Yadav to make further dents in the Indian innings and finished with career-best figures of 6 for 41. 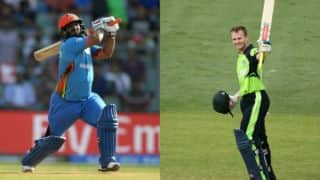 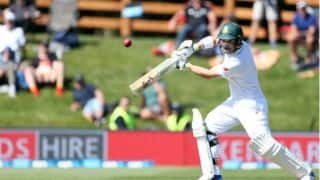