Nathan Lyon, whose figures of 8-50 became the best by a visiting bowler on Indian soil, wreaked havoc in the final session of play as India lost their last five batsmen for 15 runs.

Off-spinner Nathan Lyon claimed a career-best haul of eight wickets to help Australia bowl out India for a paltry 189 and take opening day honours in the second Test in Bangalore on Saturday. Lyon, whose figures of 8-50 became the best by a visiting bowler on Indian soil, wreaked havoc in the final session of play as India lost their last five batsmen for 15 runs. Indian opener KL Rahul top-scored with a gritty 90 but failed to find support at Bangalore’s M Chinnaswamy Stadium – the batsman’s home ground. Australia were 40 for no loss at stumps with openers David Warner (23) and Matthew Renshaw (15) at the crease. The visitors trail India by 149 runs in the first innings. With another record breaking day in Test cricket, we present some of the interesting numbers from today’s contest.

58 wickets for Lyon against India. This is the most number of wickets by an Australian bowler against India. Before this Test, Lyon had 50 wickets against India and with this 8 wicket haul, he went past Brett Lee (53), Richie Benaud (52) and Glenn McGrath (51).

3rd 7-for by Lyon against India. This is the most number of 7-for’s by a bowler against India. Previous record of 2 was jointly held by Alec Bedser, Lance Gibbs, Ray Lindwall and Muttiah Muralitharan.

7 out of 8 Indian batsmen, who fell to Lyon, recorded either most number of dismissals against the Australian spinner or joint-most.

Note: Lyon dismissing Kohli on five occasions is the joint-most by any bowler against the Indian batsman. James Anderson has also picked Kohli’s wickets five times. Similarly, against Ashwin too, Lyon recorded joint-most wickets of him as Peter Siddle has also scalped him on four occasions. Against others, Lyon is the bowler with most wickets.

56 Tests missed by Abhinav Mukund for India since his last appearance in 2011. His last Test in 2011 was against England. He becomes the 2nd Indian cricketer to miss more than 50 Tests, after Parthiv Patel (83).

4th five-wicket haul for Lyon against India, which is the 2nd-most by an Australian bowler after Benaud (5).

1st opening batsman of India to be dismissed in 90s since 2014-15 Adelaide Test Rahul. Vijay was the last Indian opener who got dismissed for 99 in the first Test of Border-Gavaskar Trophy 2014-15.

1.90 economy rate of Steeve O’Keefe from his spell of 21 overs. Last instance of an Australian spinner bowling 20 overs with economy rate under 2 in India happened in 1969-70 at Chennai, where Ashely Mallett bowled 29.2 overs at 1.80 in the final innings of the Test. 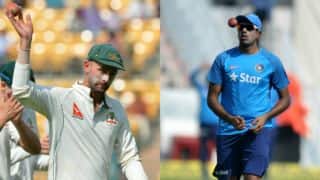