In an exhilarating contest wherein momentum swung from one side to another in rapidness, India prevailed over Australia by 75 runs to level the ongoing Border-Gavaskar Trophy.

In an exhilarating contest wherein momentum swung from one side to another in rapidness, India prevailed over Australia by 75 runs to level the ongoing Border-Gavaskar Trophy 2016-17. India fought back remarkably after a poor first day at Bengaluru, to outmatch Australia on a pitch where wickets tumbled on a regular basis. Cheteshwar Pujara and Ajinkya Rahane formed the first century stand of the series, and with two fifties in the Test and three so far in the series, KL Rahul deservingly got the Man of the Match award. India found several heroes, but Australia, despite fighting well into the fourth day, ran into familiar demons. Let us take a look at the highlights from the second Test:

India gain early advantage: With India deciding to bat after winning the toss, it became evident that Australia will be exposed to that hell batting fourth which several teams have been through in India. To their credit, Australia fought well after losing the toss to keep India under 200 in the first innings for the third time in a row. Winning the toss while playing Test cricket in India is one of the most important factors, and this was proven once again. Full cricket scorecard: India vs Australia, 2nd Test at Bengaluru

The Nathan Lyon show: Giving the ball a good rip, the seam pointing to leg-slip and extracting sharp bounce played a big role in Lyon registering the best figures by a touring spinner in India. Lyon returned with the figures of 8 for 50 in the first innings, and India s third batting collapse on the trot compounded problems for the home side that had been piling up big totals. Lyon s performance gave Australia a massive advantage early on, one they could never really capitalise on.

Ravindra Jadeja leads India s fightback: India needed one among their four bowlers to lead the fightback, especially after Australia reached 40 without any loss on Day One. Indian bowlers needed to show more intensity, backed with tight fielding, which is what was witnessed on the second day. India turned up the heat on Australia, snaffling David Warner and Steven Smith for cheap. However, a mere 6 wickets on the second day as Australia kept battling hard. For unexplained reasons, India did not utilise Jadeja enough, despite him getting a few wickets.

With 4 wickets in hand, Australia looked to garner more in their first-innings lead on Day Three, but Jadeja denied them exactly that. Jadeja removed Matthew Wade after assisting in the dismissal of Mitchell Starc at deep midwicket. After trapping Wade, Jadeja grabbed two more wickets to end with another 6-wicket haul. He claimed 3 out of the 4 wickets that fell on Day Three morning.

KL Rahul s twin fifties: On a wicket where batsmen from both the sides were troubled consistently with uneven bounce, pace, cracks as well as seam movement, local boy KL Rahul proved his mettle. Rahul struck half-centuries in both the innings and provided India with strong starts. Though he remains guilty of throwing away his wicket on both occasions, Rahul did enough to earn the Man of the Match award.

Josh Hazlewood s contribution: With India wiping off Australia s 87-run lead in the first innings without many qualms, the visitors needed one of their bowlers to lead their comeback. For the first time in the series, Hazlewood proved why he is regarded as one of the best fast bowlers in the world. Hazlewood began with knocking down Abhinav Mukund s off-stump, and followed it up with a controversial decision of sorts against Virat Kohli. He landed India in further trouble by cleaning up Ravindra Jadeja, and on Day Four, Hazlewood completed his second five-for against India. He cleaned up 4 out of the 6 batsmen in his wickets tally.

Pujara-Rahane outplay Australia: India were in tatters after being effectively reduced to 35 for 4 in the second innings. But Pujara and Rahane put their experience, local knowledge and skills to the best use and formed the first-ever partnership in excess of 100 runs in this series. While Rahane was under immense pressure to deliver after a string of failures, Pujara too was going through a dip in the form. The timing of their knocks could not have been better for them as well as from the team s perspective. Pujara and Rahane added 118 runs for the fifth wicket, and played out a wicketless final session on the third day.

DRS, Smith and Kohli: While it remains unclear how much help Australia have had over the last three days in getting their DRS calls right, but the allegation still to be established entirely takes a lot of sheen out of their spot-on appeals. Smith and the others, however, were always spotted discussing between themselves before taking the call. However, Kohli saw something more as he said in his press meet post India s victory that he can vouch for (Australian team getting help from dressing room) at least two such occasions when he was batting, but provided no further details.

Ravichandran Ashwin comes to party: It was tough for Australia to keep Ashwin quiet for a long time. In Australia s second innings, on a crumbling wicket, Ashwin rattled the visiting side s batsmen with a 6-wicket haul, which also marked his 25th five-for. In the process, Ashwin also became the fastest to 200 Test wickets at home, a feat which he achieved only in 30 Tests. 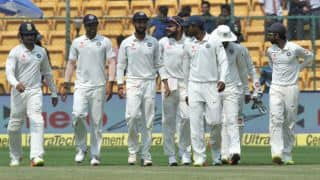