Virat Kohli will be up against the likes of Mitchell Starc and his counterpart, Steven Smith. The former dismissed him in Pune whereas Smith shone with the bat to lead Australia's charge.

The first of the four-Test series between India and Australia lasted till three days which saw visitors mauling the hosts by 333 runs. To be honest, no one expected this outcome in Pune. It was a humiliating performance by the hosts and they will have to brush aside their flaws to stage a comeback. Meanwhile, the Indian team enjoyed a much-needed break and went for trekking in the outskirts of the city. They will like to start from scratch at Bengaluru (venue of second Test) and settle scores. Here are some key clashes which may unfold for the upcoming encounter:

1. David Warner vs Umesh Yadav: Warner was looking in his elements in the first innings of the series opener. Nonetheless, Umesh was introduced into the attack after 27 overs and the move paid dividends instantly as he got rid of the left-hander. Till date, Umesh has dismissed Warner on 5 occasions. It is the 2nd most by an Indian, after Ravichandran Ashwin (6). The overall record for dismissing Warner stands with James Anderson (7). It will be another stiff competition between the duo when they lock horns at Bengaluru. FULL CRICKET SCORECARD: India vs Australia 2nd Test at Bengaluru

2. Virat Kohli vs Mitchell Starc and Steven Smith: Starc was up for the challenge against India’s premier batsman, Kohli, in the last Test. The Australian took the honours in the first face-off but will expect a fightback from the 28-year-old. Kohli’s fiery character and ability to fight fire with fire is well known and he will have answers against Starc playing on his second home, M. Chinnaswammy Stadium.

“Virat’s a class player, we all know that. He s scored a mountain of runs already this year. We re going to have to be wary of that Virat comeback, Starc said ahead of the second Test. The best part is that both players are aware of the threat posed by one another and will try to counter it effectively.

Kohli may face another competition from his counterpart, Smith. Regarded as modern-day greats, the onus automatically falls on them whenever their respective sides take on the field. Smith had the last laugh at Pune with a fine hundred whereas Kohli’s bat remained silent. Nonetheless, Kohli will be banking on Chinnaswammy turf to get himself back in form and reply strongly.

3. Murali Vijay-Cheteshwar Pujara vs Josh Hazlewood: India’s batting line-up is more than Kohli. With the able duo of Vijay-Pujara at the top, hosts can take the game away from the opponents in no time. The pair were unsuccessful in the first Test but cannot be kept in a shell for long. Vijay-Pujara have been brilliant together. The pair have registered 8 100+ and 7 half-century stands till date. Their highest partnership, 370, also came against Australia in Border-Gavaskar Trophy 2013-14.This home season, Vijay-Pujara’s highest partnership of 209 runs came against England. Apart from this, they already have numerous more century stands with 3 Tests still left to bring curtains to India’s home season.

Nonetheless, the duo’s consistency will be tested against a disciplined bowler from the opposition camp in form of Hazlewood. The 26-year-old’s knack of pitching the ball outside off stump will keep tempt a renowned pair of Vijay-Pujara. Hazlewood can also be an asset when the ball starts to reverse swing. Watch out for Australia’s spearhead who will be up against India’s Test specialists. A contest of accuracy versus consistency awaits at Bengaluru.

4. Battle of spinners: India bundled out the visitors for 260 in the first innings in Pune. Their spin trio, Ravichandran Ashwin, Ravindra Jadeja and Jayant Yadav, accounted for 6 wickets between them. To their dismay, they were outnumbered by the pair of Nathan Lyon and Steve O’Keefe who shared 7 wickets, including a 6-for by the latter.

The Indian trio slightly bettered their performance in the second outing with the red leather. Ashwin led from the front with a 4-for, Jadeja impressed the most with a 3-for whereas Jayant grabbed a wicket. But again, Lyon and O’Keefe, who were termed ‘less-threatening’ by many before the series, stunned everyone by sharing all Indian wickets in the last innings. O’Keefe again had 6 wickets to his name which led to the final outcome of the match.

Playing in their own den, Ashwin and co. will take not this ‘defeat’ lightly. The senior pros will like to counter attack in the second Test and give the Australians a taste of their own medicine. 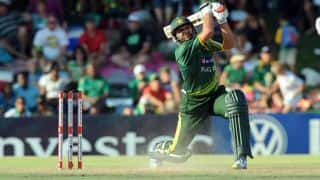