India vs Australia, 2nd Test: India began play in a desperate situation, but by the time the third day of the second Test against Australia ended, there were a lot of calm nerves.

India began play in a desperate situation, but by the time the third day of the second Test against Australia ended, there were a lot of calm nerves and eyes firmly fixated on a series-levelling victory. There was a lot of drama in between, a perplexing DRS decision against Virat Kohli, a fantastic three-wicket burst from Josh Hazlewood, and terrific contest between the two top-ranked cricket teams. India ended the day with a lead of 126 runs in the second innings, as the wicket at the M Chinnaswamy Stadium in Bengaluru continued to bemuse one and all. Let us take a look at the highlights:

Ravindra Jadeja rips apart Australia’s tail: India began the day needing to knock over two recognised  batsmen in Mitchell Starc and Matthew Wade. The Australians, on their part, needed to bide time and rotate the strike in order to extend their lead. India did not show any desperation, but every run scored added pressure on them. This is where India decided to bring on their best bowler, Jadeja, who was under-bowled  in the second innings for no apparent reason. FULL CRICKET SCORECARD: India vs Australia, 2nd Test at Bengaluru

Jadeja began with trapping Wade in front of the wickets. This was right after Ashwin had removed Starc, with Jadeja taking a sharp catch near the boundary ropes. Wade’s dismissal brought Nathan Lyon at the crease, and being an intelligent bowler that Jadeja is, he sent down a fuller delivery asking Lyon to sweep. Jadeja knew the new batsman may not be able to connect on the first ball, and he trapped the Australian batsmen leg-before on the first ball. Jadeja finished with the last wicket of the innings, snaffling 3 out of 4 wickets that fell on Day Three morning.

India’s confident start: Even though India remain deprived of 50-plus stands from their openers, KL Rahul and Abhinav Mukund provided a confident start which helped India make a strong statement. Rahul and Mukund looked for runs from the word go, and knocked off a significant chunk of Australia’s lead in no time. At lunch, it looked like India will produce their strongest performance with the bat and if a flurry of wickets is taken aside seen in the second session, they actually did. India went past the 200-run mark for the first time in the series, and also batted for an entire session without losing a wicket. FULL CRICKET UPDATES: India vs Australia, 2nd Test at Bengaluru, Day 3

Josh Hazlewood fires: Hazlewood is sheer class, and his control over the ball and ability to put it in the right areas was witnessed once again. With the old ball, he moved one sharply into the Indian captain, trapping him out leg-before. When India promoted Ravindra Jadeja, it was enticing for the right-arm pacer to come around the wicket and try finding the gap between the bat and the pads. After rapping Jadeja a few times on the pads unsuccessfully, Hazlewood made one pass between the gap in the bat and the pad, knocking down Jadeja’s middle-stump.

KL Rahul’s purple patch: If there has been one batsman who has scored runs on a consistent basis than anyone else in this series, it is Rahul.  The opener mixed caution as well as aggression perfectly, and rotated the strike with a lot of ease. He has been batting extremely well against spin and pace alike, which helped him bring up his third half-century in the series. However, it looked like Rahul threw away his wicket after doing all the hard work.

Steven Smith’s redemption: Pujara began nervously, and there were plenty of opportunities that Australia created early on against the Indian batsman. However, the lifeline came along quite early in his innings, when Smith dropped what was a regulation catch at first slip after Lyon found the edge of the bat.

Generally, Smith does not drop catches and this was one of those rare occasions. However, another chance came his way, but demanded the best out of him. Rahul likes to play away from the body, and on a delivery way outside off from Steve O’Keefe, he slashed hard. The ball would have gone for a boundary had Smith not intercepted it; he made a full-bloodied dive to his right, and pulled the ball out of thin air to convert the half-chance into a terrific wicket.

Virat Kohli’s heartbreak: The Indian captain walked out with India wobbling, and the stage was set for him to make his mark on this Test series. Kohli began with a single on the first ball, and soon flicked an over-pitched  delivery off Hazlewood for a boundary on the leg side. However, Kohli and bizarre dismissals have a love and hate relationship this series and he copped another tough end.

In the 35th over, Kohli got one nipping in to him off Hazlewood, which kept low and rapped him on the pads. Australian fielders appealed for a leg-before, but not the bowler. Umpire Nigel Llong wasted no time in raising his finger, and Kohli, on his part, was quick to ask for a DRS review and even smiled after what had happened.

The ball kept low and rapped on the pads but there was some part of the bottom of Kohli’s bat involved as well. With no Hot Spot technology available, it was even tougher to decide. However, it would have been inconclusive with Hot Spot as well, since the batsman’s contention was that the bottom of the bat had hit the ball.

The third umpire took his time. He kept going through several angles and records before ruling out that it was inconclusive, and Kohli was adjudged out since the on-field umpire had said so.

Rahane–Pujara at their best: At tea, India were tottering at 35 for 4 effectively. India needed some inspirational show to make a comeback once again, and there could not have been any better pair than two resolute batsmen in Pujara and Rahane. They dropped the anchor; Australia did not look like taking a wicket throughout the final session in which India added 91 runs. Pujara and Rahane played attrition cricket, their running between the wickets was terrific and there was a clear intent to not let Australia capitalise at all. So far, Pujara and Rahane have added 93 runs which is the highest partnership for any wicket for either sides in this series so far. 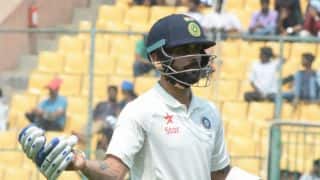 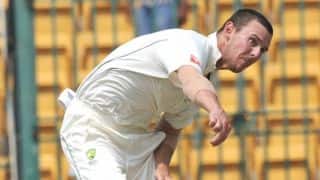