It is indeed very rare that early on in a series, competing teams arrive at a stage when the tone gets set for the entire affair.

It is indeed very rare that early on in a series, competing teams arrive at a stage when the tone gets set for the entire affair. In Australia s context, the last time a singular event left an extremely strong impact over remainder of a long series came across in the second innings of the opening Test of The Ashes 2013-14. Sticking to their plan of tormenting Jonathan Trott with short deliveries on his body, Mitchell Johnson had the England batting mainstay caught at deep square leg in second innings, leaving England tottering at 10 for 2 chasing 561. What transpired back then is well-documented, but Australia find themselves in a situation where they can truly press India against the extreme, after a terrific day at Bengaluru leaves them in the commanding position of the second Test. FULL CRICKET SCORECARD: India vs Australia, 2nd Test at Bengaluru

Australia trail by another 149 runs before every run starts hurting India, and unless the hosts unleash their spin demons, the series is set to be decided quite early than expected. Of course, for either of India or Australia, clinching this series will require them to win at least three Tests. But, with yet another abasing performance, the hosts find themselves pushed to a corner, with their backs firmly pressed against the wall. ALSO READ – India vs Australia 2nd Test Day 1: Lyon s record spell, Rahul s gritty knock and other highlights

India have failed thrice with the bat and twice so far with the ball in context of making any strong statement in the Border-Gavaskar Trophy 2016-17. So far, it has been one-way traffic with Australia dominating the world s best Test side in a manner as if it is not. Australia have not only beaten India in their own game, but by sticking to their plans so far, Steven Smith s team has shown greater intent.

At stumps on the first day, Australia reached 40 for no loss in 16 overs. While there is no big surprise in this score, it must be remembered that all Australia took were a mere 2.5 overs to strike. Mitchell Starc sent down a yorker which Abhinav Mukund had no answer to. ALSO READ – Goddamn Virat Kohli reminds us of his mortality at Bengaluru

For India, nothing less than a do-or-die situation is impeding rapidly. Behind by a mere 149 runs, a couple of healthy partnerships can put the visitors in a commanding position. Having lost the toss, Australia will be the fourth team batting on this wicket which has so far remained excellent.

But the question is, what if there is no fourth innings? What if Australia pile up a total big enough to put India in further turmoil? At this stage, Australia getting to 300 would put them 111 runs ahead of India, and scoring 350 will give them a 161-run lead.

Remember, all that Australia needed was a 155-run lead to convert it into a 440-run advantage; out-batting, out-playing India in the process in the first Test at Pune.

For India, even to keep the series alive if not looking too far ahead, the only way ahead is to spark a batting collapse in the Australian ranks. But then, they will have to hold on to their catches; Ajinkya Rahane has already spilled one. They will also have to push for wickets; bowling a mere tight line will not suffice, as seen in the first 16 overs of Australian innings.

Either way, second day in the Bengaluru Test is set to be a decisive one. If India are able to keep Australia around the total they accomplished, the hosts will keep their hopes alive. But if Australia go on to take a big lead, India will find themselves in more than just a spot of bother.

An extremely important day beckons for young Virat Kohli s Team India. But for now, Kohli and his team would be feeling the pinch of a poor first-innings performance; something that Australia have been through several times. 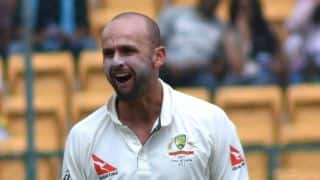