India will lead Australia 3-0 for the first time in a bilateral series if they emerge victorious on Sunday.

176 is the highest opening stand at Holkar Stadium. It was shared between GautamGambhir and VirenderSehwag versus West Indies in 2011.

1 Dhoni is just one away from 100 stumpings in ODIs for India.

1 ViratKohli is one away surpassing Ricky Ponting’s ODI hundreds (30). He will only be behind Sachin Tendulkar (49).

99 This will be the 99th ODI for Australia’s vice-captain David Warner.

2 Kohli is two catches short of surpassing Yuvraj Singh s tally (94). He will be the 8th most successful Indian fielder in terms of ODI catches.

1 Glenn Maxwell is one away from plucking 50 catches.

4 Rohit will feature in his 4th ODI at Holkar Stadium; joint-most with Suresh Raina.

3 Kohli has maximum catches in an innings at this venue.

3 for 41 Bhuvneshwar Kumar was the most successful Indian bowler in their last appearance at this ground.

1st India will lead Australia 3-0 for the first time in a bilateral series if they emerge victorious on Sunday.

9 With another ODI win, Kohli will break his previous best of 8 consecutive victories. He will also join Dhoni with 9 wins on trot.

No. 1 India have a chance to topple South Africa as the No. 1 ranked ODI side. They are currently tied with Proteas at 119 ratings, but miss out on the top spot on 0.09 decimal points. Interestingly, last year India entered the New Zealand Test played here as the No. 1 side. 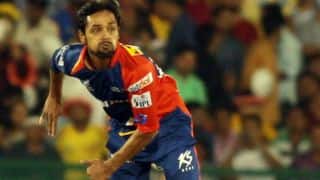