India’s failed tactics, Steven Smith's brilliance, and other highlights from Day 2 at Melbourne.

India were 108 for one at stumps on Day Two with Murali Vijay standing tall with a fine unbeaten 55. The Indians would be pleased with the way they batted in the final session; the day belonged to Australians and their skipper Steven Smith, who registered a career-best of 192. Shiamak Unwalla brings the highlights of the second day’s play.

India bowl atrociously in the morning session, again: The fact that India get carried away bowling the short ball was perfectly evident at The Gabba. That they do not learn from their mistakes was evident on Saturday, when they over-did the short ball to Brad Haddin. Having dismissed him twice while bowling short to him at The Gabba, the Indian pacers went overboard till there came a point when Haddin did not even try to come on the front foot, hanging back and pulling everything with disdain. After he was dismissed, it was Mitchell Johnson who used his long handle with complete disregard for the bowlers. India ended up conceding 130 runs and took only two wickets in the session.

India’s tail woes continue: At The Gabba it was Johnson, at the Melbourne Cricket Ground (MCG), it was Ryan Harris. ‘Ryno’ rammed India with a high-quality 74 off 88 balls after Johnson’s 28 set things up. Harris batted less like a No. 8 and more like a proper batsman, hitting India’s mournfully wayward bowling to all ends of the MCG. It was not mindless slogging either; one of his off drives was called the ‘shot of the day’ by a commentator. India ended up conceding 314 runs after taking the fifth Australian wicket.

Steven Smith smashes some more records: Anyone watching this series would agree that Steven Smith is fast emerging as one of the best batsmen in world cricket. Over the course of his 192-run knock he went past 2,000 Test runs, 500 runs in the series, and fell just eight runs short of becoming the youngest Australian captain to score a Test double century. The hundred was also his seventh in Tests, his fifth this year, and the second of this series. It was also his second 150-plus score, the first having come at the Adelaide Oval. Another impressive feature of Smith’s innings is that he went from two runs off 31 balls to 34 from 69 balls, and continued to either slow down or accelerate throughout his innings depending on the situation.

India start well: It may have been a long, long time coming, but India managed to put on back-to-back 50-plus opening partnerships in an overseas Test series. Murali Vijay and Shikhar Dhawan looked good, leaving and driving with equal comfort. But as is his wont, Dhawan got himself out after getting set. Having done the hard work of getting himself in, he poked at a nothing ball from Harris and was caught well by Smith at slip. After that, however, Vijay and Cheteshwar Pujara were involved in a crucial unbroken 53-run stand to take India to 108 for one at stumps. Vijay scored his third half-century of the series, to go with his century at The Gabba. He was unbeaten on 55 at stumps, and continued to look the best Indian batsman of the series by far. Pujara meanwhile survived a dropped chance to remain not out on 25. India did well in the final session, but going by recent history, they could lose a heap of wickets in the first session of Day Three.

India vs Australia, 3rd Test, Day Two at Melbourne: Pick of the tweets 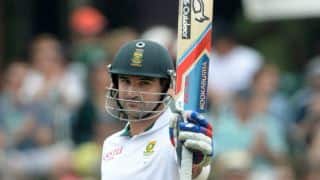