1st David Warner became the 1st Australian to slam a hundred in his 100th ODI. He joined the list that boasts of names such as Ramnaresh Sarwan, Chris Gayle, Kumar Sangakkara, among others.

3rd This was India‘s third instance of conceding a hundred to a batsman featuring in his 100th ODI.

231 was the highest opening stand at M. Chinnaswamy Stadium, Bengaluru, courtesy David Warner and Aaron Finch. The previous best was held by Shane Watson and Brad Haddin; they added 182 runs together.

16th Finch and Warner’s spectacular stand was the 16th highest partnership for the first wicket.

1st Virat Kohli became the fastest to 2,000 runs as skipper. He took only 36 innings compared to second-best AB de Villiers (41). He has 10 fifties and 8 hundreds as skipper.

2nd Rohit and Kohli were involved in a run out for the second time while playing at M.Chinnaswamy Stadium, Bengaluru. The previous one also came against Australia (November 2, 2013).

24 Kohli has been involved in 24 run-out dismissals in 109 innings.

9 Kohli remained at par with Dhoni in terms of longest winning streak enjoyed by an Indian ODI captain.

367 Australia took 367 days to notch up their first win overseas. Their last win had come against Ireland on September 27, 2016 at Benoni, Willowmoore Park, South Africa.

1st This was also Australia’s first 50-over win abroad in 2017. They end their 6-match losing streak. 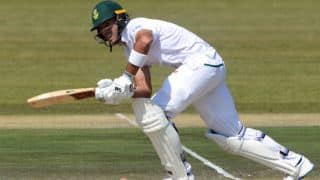