Indian cricket s long, Test-heavy season has finally reached its climax, with India and Australia set to play in the fourth and final Test of Border-Gavaskar Trophy 2016-17 at Dharamsala. With the series levelled at 1-1, the stakes are high for the two sides. India Australia series have always made the news for reasons beyond cricket, and this one has been no different. From the DRS gate to the Indian captain almost using the c-word for his opponents to the salvos being fired by both former and current players of the two teams to the Indian captain s shoulder becoming a bone of contention between the two teams, this series has seen a lot. FULL CRICKET SCORECARD: India vs Australia, 4th Test at Dharamsala

However, with the series on line, the focus has once again shifted to cricket ahead of last encounter on Saturday. With a cloud of uncertainty over Virat Kohli s participation, India have called in Shreyas Iyer, who hammered an almost run-a-ball double ton against the Australians in the tour match, as cover. The conditions at Dharamsala traditionally offer support to pace- and swing-bowling, which may again force a few changes. However, besides the changes, another thing that will catch the eyes will be battles within the battle. Let us take a look at some of the key individual battles from the fourth Test.

Ravindra Jadeja vs Steven Smith: This will be the battle to watch out for between the best bowler and the best batsman this series. If Ravindra Jadeja has 21 wickets to his name so far in Border-Gavaskar Trophy 2016-17, Steven Smith has 371 runs at 74.20. What catches the eye, though, is the fact that of Smith s five dismissals this series, three have been caused by Jadeja. One that stands out is the second-innings dismissal from Ranchi Test, where Smith shouldered arms to leave the delivery alone, only to see it uprooting his off stump. Another intriguing battle between the two will be on display in Dharamsala.

Australian spinners vs KL Rahul: KL Rahul, who has four fifties from five innings and is at the top of his game, has had his share of troubles against the Australian spin duo of Steve O Keefe and Nathan Lyon. Four of Rahul s five dismissals have come against spin, with the batsman becoming victim of O Keefe and Lyon two times each. It will be interesting to see how Rahul counters the spin threat at Dharamsala, which though traditionally has a wicket conducive to seam and swing, but is likely to be slow for the fourth Test.

Josh Hazlewood vs Cheteshwar Pujara: Josh Hazlewood has been the pick of Australian pacers and has done exceptionally well on this tour so far. Whatever the outcome of this series is, Hazlewood is certain of leaving the Indian shores with his reputation enhanced. Up against him early in the Indian innings will be Cheteshwar Pujara, India s best batsman this series. Pujara is right up there, at the top, only behind Smith in terms of runs scored this series. Hazlewood, too, has been the second best pacer this series after Umesh Yadav. Pujara s troubles against movement and pace early in the innings are well known, and it will be interesting to see how he deals with Hazlewood.

Ishant Sharma vs Matt Renshaw: Though Ishant Sharma has not had a good series statistically, he has had his moments. In the Ranchi Test, for example, he was in the middle of a terrific spell against Matt Renshaw. The duel between the two made for a delightful watch, with Ishant eventually emerging as the winner in the end. At Dharamsala, Renshaw will have a point to prove against Ishant.

Ravichandran Ashwin vs Peter Handscomb: Though Ashwin has taken 17 wickets in the series so far and is placed third on the list of highest wicket-takers, he has not had a good series by his own standards. The off-spinner has not quite set the series on fire. Same with Peter Handscomb, who though has done well, but is yet to make a mark with a standout performance. He showed signs with unbeaten 72 off 200 at Ranchi in the second innings, which eventually saved the game for the tourists. Handscomb s knock left a big dent on Indian spinners ego, as they failed to dismiss him. Ashwin, however, has dismissed him twice in the series and will look to make amends, at Dharamsala, by dismissing him early in both the innings. 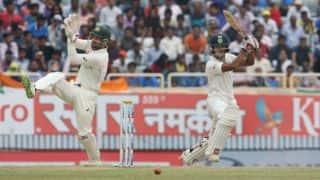