Australia stunned everyone when they beat India in the first Test at Pune by 333 runs, but the hosts bounced back extremely well to win the second Test at Bengaluru by 75 runs.

India take on Australia in the fourth and final Test of Border Gavaskar Trophy 2016-17 at Himachal Pradesh Cricket Association (HPCA) stadium in Dharamsala. The four-match series is level at 1-1. Australia stunned everyone when they beat India in the first Test at Pune by 333 runs, but the hosts bounced back extremely well to win the second Test at Bengaluru by 75 runs. After a hard-fought third Test, which ended in a draw, everything comes down to the final Test at India s new Test venue Dharamsala. A win or a draw will ensure Australia retain Border-Gavaskar Trophy. However, only a win for India will give them the coveted trophy. FULL CRICKET SCORECARD: India vs Australia, 4th Test at Dharamsala

With so much at stake, both teams will want to pick the right combination for the Test. Australia are considering in bringing in fast bowler Jackson Bird in place of Steve O Keefe, who has not shown the same form he did in Pune. Australia will, therefore, have three seamers and Nathan Lyon as their lone spinner. India, too, have the luxury of picking an extra fast bowler if needed. There were talks of India playing five bowlers. Considering that there is a tinge of grass on the pitch, both teams will be temped to get in an extra fast bowler in their side. For India, that option might be Mohammed Shami, who was a last minute inclusion tothe Test squad ahead of the fourth Test.

Let us now take a close look at the likely XI for both teams:

Top-order: It would not be wise to mess with the opening slot at least for India going by current form. KL Rahul has struck four fifties from five innings, while Murali Vijay managed to find his feet at Ranchi when he played a resolute knock of 82. The duo will once again be expected to weather the early storm and make it easier for the middle order. READ: Will play only If I clear fitness test , says Virat Kohli

However, for Australia, David Warner has been in poor form. 131 runs from six knocks is nowhere close to what Warner is capable of, but Australia will hope that he is saving his best for the last, with Matt Renshaw at the other end.

Renshaw, on the other hand, has impressed everyone with his solid technique against spin as well as temperament. He got off to good starts but failed to convert it in to a big one. READ: Rahane more chilled out than Kohli: Smith

Both teams have been blessed with excellent No. 3 batsmen. For India, it will be ‘marathon man’ Cheteshwar Pujara who became the first Indian to face over 500 balls in a Test innings when he scored 202 off 525 at Ranchi.

Australia skipper Steven Smith put the entire DRS controversy behind him after scoring an unbeaten 178 in the previous Test. He looked in fine form in the first innings, but was bowled by Ravindra Jadeja in the second innings after the ball crashed into his off stump while he was trying to pad it away. Smith is currently leading the run-getters charts with 371 runs at 74.20. His will be the most priced wicket India will be after.

Middle-order: Shaun Marsh and Peter Handscomb did a fine job at Ranchi, playing over 62 overs in the second innings to draw the innings. While Marsh played 197 deliveries for his 53, Handscomb remained unbeaten on 72 off 200 deliveries. Both will look to have similar impacts in the final Test as well. However, India are still sweating on the fitness of their skipper Virat Kohli who is yet to recover from his shoulder injury. Shreyas Iyer has been called up as his cover. Kohli, in fact, missed the net session on Thursday, and will undergo a fitness test before the match. His absence will give 22-year-old his maiden international cap and will present Ajinkya Rahane a chance to lead India in the longest format for the first time. READ: ‘Will play only If I clear fitness test’, says Virat Kohli

On his return to the Test arena, Glenn Maxwell struck a sublime ton. But the form of wicketkeeper Matthew Wade is still a concern, but has scored useful runs at No. 7.

As far as India are concerned, Karun Nair has not been able to replicate the form he showed while scoring that mammoth 303 not out against England. He has scored only 49 from three innings. Barring that crucial fifty in Bengaluru, Rahane has failed to deliver as well.

However, Wriddhiman Saha put all his critics to rest with a sublime 117 at Ranchi. More importantly, he put up 199 for the seventh wicket with Pujara. It helped India take the lead, after Australia scored 451 in their first innings.

Bowlers: Australia are unlikely to make any changes in their bowling attack. Despite talks of Bird replacing O Keefe, Australia will not risk going in with just one spinner. They will go in with both Pat Cummins and Josh Hazlewood, who did well in the previous match. Nathan Lyon, however, was not up to the mark at Ranchi, picking up just a wicket after his heroic 8-wicket haul in Bengaluru. Australia and he will hope that it was a one-off bad game.

As far as India are concerned, it will not be much of a surprise if Ishant Sharma is replaced by Mohammed Shami. Shami last played against England in the third Test and has been missing in action since. He made a triumphant return to competitive cricket in the Vijay Hazare trophy 2016-17 final, where he picked up four wickets for Bengal against Tamil Nadu. Umesh Yadav has been brilliant, picking up 12 wickets in 3 matches so far. Ravichandran Ashwin has been inconsistent with the ball. He picked up 6 wickets in Bengaluru to hand India a win, but has been overshadowed by the all-round efforts of Jadeja who has picked 21 wickets and scored an unbeaten 54 at Ranchi. READ: Australia chase history; wounded India eye winning end

If the series started with Australian batsmen figuring out ways to tackle Ashwin, it is coming to an end with the Aussies figuring out how to negotiate Jadeja. Ashwin has not been effective with the bat as well and Saha s good form will perhaps ensure that the wicketkeeper-batsman bats above Ashwin in the final Test. 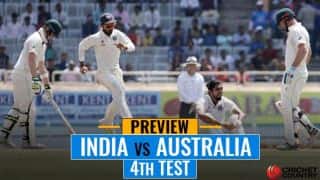 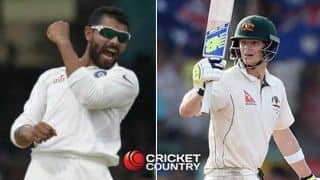