Mitchell, son of Geoff Marsh and younger brother of Shaun Marsh, is currently the preferred Test all rounder in the Australian Test team.

In last few years, teams have often given plenty of chances to players with talent and most of them have not been able to live up to expectations. In some cases, the players take a long time to do justice to the ability they have. Australian all rounder Mitchell Marsh is one such player on the list. Mitchell, son of Geoff Marsh and younger brother of Shaun Marsh, is currently the preferred Test all rounder in the Australian Test team. He made his way to Test side in 2014 against Pakistan in UAE but secured his place by replacing Shane Watson in Ashes 2015.

But, once again his place in the side is under scanner ahead of Border-Gavaskar Trophy 2016-17 in India. Firstly, we must understand why his place is under scanner. Well, his numbers speak it all. From 19 Tests, he has 626 runs at 23.18 and 29 wickets at 37.27. That is certainly not very impressive for a player who has often been reckoned as one of the most talented Australian all-rounders.

With the bat, Mitchell was given the role of No. 6 batsman, a position where Australia have struggled the most in their line-up in the recent past. With the ball, he is not expected to be the strike-bowler. In fact, he is expected to support the mainstream bowlers being the third seamer of the team and chip in with some crucial wickets. And here too, he has not quite lived up to the expectations.

From 31 batting innings, only two fifty plus scores and 35 bowling innings, only one five-for do not do justice to his role in the side. He has failed more with bat than the ball. Number six is an important place in any team s batting line-up, where the batsman is expected to be adaptive. No matter whom he is facing, no matter how the pitch is behaving, no matter what is the situation of the game, No. 6 should know how to stay on the wicket and most importantly, he must know how to bat with the tail.

It is something Marsh junior will have to focus on in the upcoming Test series.

For Mitchell, this India tour is a perfect platform to seal the spot in the Test team. But the question is whether he will get the entry to playing XI or not. India, renowned for spin-friendly conditions, may be more suited to Glenn Maxwell the spin bowling all rounder. Moreover, Maxwell has been knocking the Test door regularly.

Not only the Maxwell factor, but Mitchell Marsh will have one more issue to deal with. He has been injury-prone throughout his career, just like his elder brother Shaun.. But even if he remains fit during the entire series against India, there are very less chances of him getting to play. He can only be the part of XI if Australia decide to go with two spinners.

On his last tour of Asia, which was in Sri Lanka last year, Mitchell s contribution probably went unnoticed maybe because of their humiliating defeat. Whenever he got the chance to bat, Mitchell Marsh did decently in those tough conditions. On an average, he played 47 balls in each innings of the Sri Lanka series and picked only two wickets from four innings he bowled. Surely, not very impressive again.

But will it be wise to pick Maxwell ahead of him, who is not a big turner of the ball and neither has any prior experience of exploiting such conditions. True if he gets going with bat, it is always difficult to stop him and same has been said about Mitchell Marsh by Darren Lehman. For him he s got to work out what works for him, and my personal opinion is when he s playing shots he s a lot more dangerous, Lehman had said about him.

Not only Lehman, Shane Watson also recently backed Mitchell Marsh and said that he is just one good innings away. “Just one good innings under his belt could certainly really turn things around from a Test match point of view,” Watson told The Unplayable Podcast. “He’s [Marsh] an incredibly talented young man; he provides a lot with the ball and with the bat he’s a very, very powerful striker of the ball. If he can find the balance between defence and attack, which he hasn’t really found so far, there’s no doubt it won’t be far away.”

Besides his batting, Marsh junior has also got the backing for his bowling from former Australian national selector Mark Waugh and Ricky Ponting, who wants him to be used as opening bowler in India. You could play one quick and then play Mitchell Marsh as the opening bowler and slide someone (a spinner) in, Waugh was quoted as saying by Cricket Australia s website.

Ponting backed Waugh, asserting that Marsh may prove to be effective in Indian conditions. You d think the Australian team would only play two specialist fast bowlers (and) I think Mitchell Marsh s bowling in India will be a lot more effective than (Hilton) Cartwright s, Ponting had said.

All in all, Mitchell Marsh has got the backing and now it is time for him to prove by living up to his potential. It will be difficult for the Australian selectors to pick the XI with three seamers and his competition will be more with himself than Maxwell. If he does well in whatever chances he gets, he can be seen wearing the Baggy Green once again in the upcoming Ashes, only if he keeps himself fit. Virat Kohli's message to Indian athletes: If you can believe, you can achieve anything 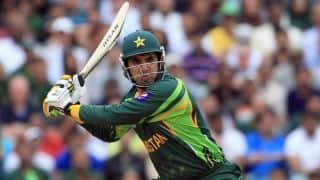