Chennai-born Murali Vijay will be playing his 50th Test in Ranchi. So far just 28 Indian cricketers have secured this milestone.

All controversies, including the Virat Kohli-Steven Smith one, will take backseat as India and Australia will enter the third Test at JSCA International Stadium Complex in Ranchi on Thursday. While India and Australia will lock horns in the Border-Gavaskar Trophy encounter, the Test will also mark a special occasion for Murali Vijay. Chennai-born Vijay will be playing his 50th Test in Ranchi. So far just 28 Indian cricketers have secured this milestone, of whom only four have been full-time opening batsmen: Sunil Gavaskar, Virender Sehwag, Navjot Singh Sidhu and Gautam Gambhir. However, there is some uncertainty over his availability due to his shoulder injury.

Vijay s technical gifts have made him a renowned cricketer across the world. He has shone everywhere, in England, Australia, Sri Lanka, South Africa, as well as at home. Rarely has he failed in an entire series. All this came after some curious teenage days, where he ran away from their home to find his identity and was later dropped for his long hair. It was a been there, done that in every field for Vijay prior to entering the Test arena.

As Vijay completes his 50th Test, let us go through his journey to Test cricket:

Identity crises: Well, there is nothing to get amused, but Vijay did fail to clear his 10+2 board exams and left his home to search for his identity. He stayed in a hotel in Chennai s busiest area T-Nagar, along with two other men for 6 months.

The Tendulkar inspiration: Remember when Sachin Tendulkar had slammed 136 to guide India to victory against Pakistan in the first Test at Chepauk, Chennai? Vijay was spectator amongst the crowd that had gathered and Vijay s hazy goal was finally clear.

From college to cricket field: Vijay followed his dream and played for his school cricket team. It was former Indian bowling coach Bharat Arun, who noticed his talents and asked him to play for Chennai s club team, Chemplast.

Bizzare: As mentioned earlier, it might sound weird but Vijay was not selected for the Tamil Nadu team due to long hair. We have seen MS Dhoni flaunt it during his early international cricketing days and that too with style.

The journey begins: He finally got a call for the Tamil Nadu Under-22 squad CK Nayudu Trophy 2004-05.

Ranji Trophy calling: Despite poor performance in club cricket and Under-22 tournaments, Vijay was selected in the Tamil Nadu squad for the Ranji ODI Trophy in February 2006.

Paving way to Duleep Trophy and India A: Vijay rose to the occasion in his debut First-Class season, Ranji Trophy 2006-07, in which he finished as the third highest run-getter of the tournament and was soon selected for Duleep Trophy followed by India A in September, 2008.

Chance Test debut: Vijay finally made his Test debut in 2008, replacing Gautam Gambhir, who was banned for a Test after he elbowed Shane Watson. Vijay did not disappoint and went on to score 33 and 41. The Test is also best remembered for being Dhoni s first Test as full-time Test skipper, and Sourav Ganguly s last.

Path to limited-overs cricket: Following his performance in his debut Test, Vijay was selected for the Indian ODI squad for the first three matches against the touring England team, without playing a single game

Double bonanza: Vijay was taken on the tour of Bangladesh in January 2010 as a reserve batsman and was called into the team after VVS Laxman injured a finger in the first Test. In the same match, No. 3 batsman Rahul Dravid was injured after being hit under the jaw by a bouncer, so Vijay filled in and played inthe two-match Test series against South Africa.

First milestone: Vijay’s slammed his maiden Test century against Australia in the Border-Gavaskar Trophy 2010-11, thanks to Gambhir who was injured in the first Test and was ruled out of the second.

Vijay s dream home series: Though he was dropped from the national squad later, Vijay was brought back in the 2013 home series against Australia replacing out-of-form Gambhir. It was a dream series as he was the highest scorer with 430 runs including two centuries, both which were 150-plus, and a half century.

International recognition: Vijay made his first Test century outside India on July 10, 2014 at Trent Bridge against England. He scored 146 and was the leading run scorer for India in that series with 402 runs from 5 Tests. He continued his stupendous form and struck fine centuries in Brisbane later that year and a 150 against Bangaldesh in Fatullah in 2015.

Records are here to stay: Vijay has already slammed 3 centuries in the 2016-17 series with 2 of them coming against the visiting English side. 3 of this 9 Test hundreds have come overseas. He bowls part-time off-spin and has a wicket to his name. 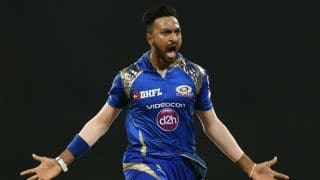