Starting with a Test in 1979, the fourth ODI on Thursday will be Australia's 15th international game here.

M Chinnaswamy Stadium is one venue where the Australians have played a lot of cricket. Starting with a Test in 1979, the fourth ODI on Thursday will be their 15th international game here. Out of these, 12 have come against India. They have played 6 ODIs against the host, losing 4, winning 1, and the remaining ending in no result.

India have already pocketed the ODI series after their win in the third ODI at Indore. They have also climbed to the No.1 spot in ICC ODI Rankings. Ahead of their seventh clash in an ODI at Bengaluru, let us take a peak at the past encounters.

The Nehru Cup 1989-90 saw 6 teams participate. Australia were having a mixed run. They lost to England and Pakistan, won against Sri Lanka and West Indies. The Bengaluru tie against the host was going to decide their fortune. India had beaten Sri Lanka and England but lost to West Indies. It was a do-or-die situation for Australia who were playing their last league game.

Australia elected to bat and were 165 for 2 at one stage. Ajay Sharma ended his career with a First-Class average of over 67. He did not enjoy a happy run with the bat for India. However, he rose to this occasion and claimed the wickets of Geoff Marsh, Dean Jones and Allan Border to restrict the Australian charge to 247 for 8.

India were off to a strong start. Skipper Krisnamachari Srikkanth and Raman Lamba had put up a 115-run stand between them, scoring 58 and 57 respectively. From 115 for 0, India had collapsed to 209 for 7. Kapil Dev was the seventh wicket to fall.

Chetan Sharma and Manoj Prabhakar were all-rounders of great repute in domestic cricket. They proved their worth. They added 40 to seal the win, and knock out the then world champions from the competition.

India’s run ended in semi-final after West Indies defeated them at Mumbai. Pakistan went on to win the tournament, courtesy a penultimate-ball win.

This was the third game of the Titan Cup 1996-97. Both India and Australia had suffered defeats in the hands of South Africa who were touted the tournament favourites. Australia elected to bat and captain Mark Taylor s maiden ODI hundred guided them to 215 for 7.

Australia had a formidable bowling attack. Glenn McGrath and Damien Fleming were amongst the best pacers, and the trio was completed by a talented young man by the name of Jason Gillespie. Then they had the Chinaman bowler Brad Hogg who was difficult to read.

It seemed as if captain Sachin Tendulkar batted on a different surface. They were 41 for 2, a run later Mohammad Azharuddin was judged leg-before wicket off Gillespie and that caused a 17-minute stoppage due to crowd disturbance. The play could only resume when Azhar appealed the crowd. Sourav Ganguly was run out, and India were reduced to 47 for 4.

Tendulkar fought a lone battle, and he was eighth out, getting trapped leg-before off Steve Waugh. He had scored 88 off the team’s 164. A defeat loomed over.

Local boys Anil Kumble and Javagal Srinath, who had earlier in the day registered figures of 10-2-35-0 and 10-0-40-2 respectively, came to the rescue act. Much to the glee of their mothers present in the stands, the Bangalore boys added a match-winning 52 off 7 overs. Kumble was 16 not out, while Srinath played the aggressor with a 23-ball 30 not out. Earlier in the day, another local boy, Venkatesh Prasad had claimed a 3-for.

India had done the impossible. Steve Waugh’s Australia, one of the greatest sides, had won 15 Tests in a row before they landed in India in February 2001. Waugh called the tour: the final frontier. Australia conquered Mumbai with ease to stretch the streak to 16. Australia were set to win a series in India for the first time in over 3 decades.

They did not. In one of cricket’s most remarkable comebacks, India won in Kolkata and Chennai to win the series 2-1. Waugh’s men were hurt. They desperately wanted to change things in ODIs. They were the world champions after all, but India had the momentum.

Tendulkar blasted them in the warm-up game. Riding on his 49-ball 93, India XI went on to beat Australia.

The series commenced. While Indian captain Ganguly irked his opposite number by making him wait for the toss, his boys added salt to the woes with on-field performances.

This venue was the host for the first ODI. India elected to bat. Ganguly was out for a painstaking 6. Tendulkar and VVS Laxman played cameos of 35 and 45 respectively. Rahul Dravid got 80 and a youngster making a comeback, named Virender Sehwag, aptly supported him.

He looked more of a Tendulkar’s clone. He had played an ODI 2 years back in Mohali, only to be dropped. Sehwag surprised Australia with a 54-ball 58. His Delhi teammate and wicketkeeper Vijay Dahiya blasted a 39-ball 51 to help India to 315.

Australia would not give in. Matthew Hayden kept them in the hunt. Ganguly’s bat had fallen silent, but he picked the all-important wicket of Michael Bevan for 49. Hayden was dismissed one short of what could have been his first ODI hundred. He was trapped leg before by Sehwag. He went on to pick 2 more wickets as Australia folded for 255.

India had taken 2-1 lead till third ODI, but Australia came back strong to win the last 2 games and pocket the series.

Two-and-half years post their last defeat at the same venue, Australia successfully avenged the loss. It was eighth match of the TVS Cup tri-series. Australia had mauled India earlier in 2003 World Cup final. In almost a repeat, Australia elected to bat first and piled up 347. Adam Gilchrist and Ricky Ponting slammed hundreds. Damien Martyn gave the innings the finish it needed.

Tendulkar kept the hosts in the hunt. There were cameos from Sehwag, Ganguly and Dravid, but they weren’t good enough. Andrew Symonds finished with a 3-for. Australia returned the favours of last time by bettering their win by a run.

India had just won the inaugural edition of World T20. MS Dhoni, now the new ODI skipper, had a tough assignment that of facing world champions Australia in a home series. The series commenced at this very ground.

Michael Clarke has fond memories of this ground. It was here he had slammed his match-winning hundred on Test debut. Clarke was not over; he impressed Bengaluru again with a sensational 130. Australia posted 307 for 7.

India resumed chase and lost the in-form Tendulkar for a 6-ball duck. The play was called off due to rain after 2.4 overs. Had the rains come a few minutes early, Tendulkar would have saved from this nought. Nevertheless, it went on to be his last score of 0 at home in ODIs.

India went on to lose the series 2-4.

Virat Kohli remains one of the very few players to remain with same franchise since inception of IPL. Kohli has been Royal Challengers Bangalore’s (RCB) skipper for the past 6 seasons. Bangaloreans had flocked to the venue to witness their hero continue his sublime form. The series was tied at 2-2 and this was the decider.

Australia put India in. Shikhar Dhawan and Rohit Sharma got India off to a strong start. Dhawan fell with India at 112; a run later, Kohli was run out for 0. The result was a stunned crowd. Few blamed Rohit for the mix-up.

Never mind, Rohit made amends. He went on to belt ODI cricket’s third double-ton. His 209 and MS Dhoni’s 38-ball 62 propelled India to 383. But was that safe?

Not until James Faulkner was at the crease. Australia were reduced to 74 for 4 in 17th over, but then began the mayhem. Glenn Maxwell slammed a 22-ball 60, Shane Watson a 22-ball 49, and Faulkner reached his 100 from just 57 balls.

Faulkner shared a 115-run for the ninth wicket with Clint McKay. He was the last batsman out. At that point, Australia needed 58 from 30 balls, a match that they could have won had they had wickets in hand.

There was another centurion in this game Vinay Kumar. The local boy was plundered for 102 runs from his 9 overs. 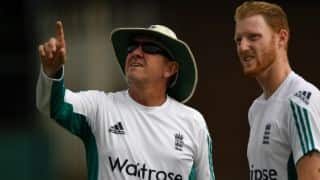 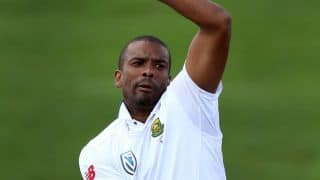