During their 2016 tour of Australia, India found in Bumrah and Pandya a much-needed fast bowler and pace-bowling allrounder.

India begin their tour of Australia with the first of three T20Is in Brisbane on November 21, pitting Virat Kohli s second-ranked team against Aaron Finch s No 3. The fortunes of the two teams in T20Is has been different in their most recent series: while Australia were blanked 0-3 by Pakistan in the UAE recently, India beat West Indies 3-0 at home.

India have won four of six T20Is in Australia, which includes a landmark 3-0 sweep when they last toured there in early 2016. During that tour, two young cricketers were handed their international debuts – Jasprit Bumrah and Hardik Pandya. It proved a special T20I series for India, who led by Kohli s hot streak with the bat – he made 90*, 59* and 50 – downed Australia in each match, and in Bumrah and Pandya found a much-needed fast bowler and pace-bowling allrounder.

Called up midway during the series as Mohammed Shami s replacement in India s T20I squad, Bumrah, 22, found himself making his ODI debut in the last game when Bhuvneshwar Kumar was ruled out with a hairline fracture in his right hand. Pandya, also 22, was already in India s T20I plans after a successful IPL with Mumbai Indians, which included some spectacular fielding efforts and a superb unbeaten 61 from just 31 balls, and success for Baroda.

On ODI debut, coming on as first change, he did very well to finish with 2/40 in ten overs, taking out the rival skipper Steve Smith for 28 and later hitting James Faulkner s off stump with a pin-point yorker. In an innings in which Australia made 330/7, Bumrah s analysis was exemplary for a debutant.

Come the T20Is, he and Pandya made their debuts in the format together. Bumrah made an immediate impact with 3/23 in 3.3 overs, his victims being David Warner upfront and Faulker and Cameron Boyce down the order as Australia failed to chase a target in excess of 160 for the 15th time in 16 T20Is. On debut, Bumrah looked like India s best bowler has he stifled Warner and eventually flummoxed him with his pace and later yorked Faulkner. Fitting, the wicket of Boyce came when Pandya held as simple catch at mid-off to give Bumrah his third wicket and India victory by 37 runs.

Pandya did not get a chance to bat in that game, but got the wickets of Chris Lynn and Matthew Wade while conceding 37 runs in three overs.

As the series shifted from Adelaide to Melbourne, the rookie duo was again in the thick of things as India claimed the series with un unassailable lead. Set a target of 185 after another Kohli fifty, Australia fell 27 runs short. This time Pandya struck first, foxing Lynn into a false slog in the 11th over after taking the catch of Shaun Marsh moments earlier.

Tossed the ball at the back end of Australia s chase, Bumrah once again displayed his prowess by yorking John Hastings and bowling Andrew Tye to snuff out two wickets in the last over and finish with 2/37 in four.

In the last T20I in Sydney, which India won by seven wickets off the last ball to sweep Australia 3-0, Bumrah was expensive in conceding 43 runs in four overs for the wicket of Lynn courtesy, while Pandya went for 17 in two wicketless overs.

Their success in these three matches helped India win the series, and pitchforked both into the team s setup as vital players. Since then, Bumrah has soared to become the No 1 ranked bowler in T20Is and ODIs (he currently remains the top-ranked in ODIs)

As India arrive in Australia this month, Bumrah has evolved into the spearhead of India s attack across formats, but Pandya is not part of the current team after being sidelined by a back injury sustained during the Asia Cup in September. His brother Krunal has taken his place as one of India s allrounders, and will hope to emulate his sibling in his first tour of Australia. 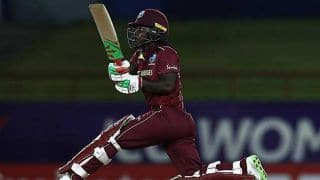