Bangladesh might not want to deviate from their winning combination from the 1st ODI.

Following a heavy 79-run defeat to rising stars Bangladesh in the first ODI, former world champions India would look to turn the tables in the second of the three-match ODI series at the Shere-e-Bangla National Stadium on Sunday. As the loss was a grave one for India, the team line-up could well see a shuffle for Sunday’s game. Ayush Gupta predicts the likely XI for both sides.

Top-Order: Bangladesh, who opened their top order with the explosive likes of Tamim Iqbal, Soumya Sarkar are most likely to stick to this combination as they contributed with an impressive 102-run opening stand. The two were followed by Litton Das at number three; however, he failed to fire scoring a mere eight and could be possibly be replaced by Mominul Haque. PREVIEW: India vs Bangladesh, 2nd ODI at Mirpur

For India, both Rohit Sharma and Shikhar Dhawan were off to a good opening start, adding 95 runs for the first wicket. It is almost certain that skipper, MS Dhoni would stick to this very opening pair, with vice-captain Virat Kohli at number three, who was unfortunate to be dismissed for a solitary run.

Middle-order: The Bangladesh middle order is equally talented and strong with the likes of wicketkeeper-batsman, Mushfiqur Rahim, followed by star all-rounder, Shakib-Al-Hasan, and Sabbir Rahman, along with Nasir Hossain. Although Sabbir and Nasir contributed with the bat, Shakib mostly fired in all capacities, claiming 2 for 33 and scoring an impressive 52. Thus, the middle order looks to be untouched and unchanged. READ: Bangladesh fans jubilant following win against India

India, on the other hand, too had a brilliant middle order in the form of Ajinkya Rahane, Suresh Raina, Dhoni and Jadeja. However, it was Rahane and Dhoni, who failed to fire, while Raina and Jadeja played their part. Dhoni might not like to change the order even after the defeat. However, if he chooses to drop Rahane, Ambati Rayudu could well make his way in. And, if Jadeja too misses out, it’s Stuart Binny who comes in.

Bowling attack: Bangladesh have a consolidate bowling attack right now, with the likes of skipper, Mashrafe Mortaza, Rubel Hossain, Taskin Ahmed and Mustafizur Rahman. The trump card undoubtedly would be Mustafizur, who claimed 5 for 50 in his debut game on Thursday, and the skipper would keep him for in the team for the next game as well on Sunday. READ:  India showed arrogance and complacency against Bangladesh in 1st ODI

However, Rubel seems to be struggling with form after failing to claim a wicket on Thursday, and if he is considered to be dropped, it could be a problem for Mortaza as they don’t have many options in the pace department, and would have to rely with an extra slow bowler in the form of Arafat Sunny or Rony Talukdar.

India too have a world class bowling attack. However, it struggled to trouble the Bangladesh batsmen initially on Thursday. With the likes of Ravichandran Ashwin, Bhuvneshwar Kumar, Mohit Sharma and Umesh Yadav, it should be enough to destroy any batting order in the world. READ: Virat Kohli’s recent ODI form is a worrying aspect for India

However, they seem to be a little rusty on the current Bangladesh batsmen. Although they were able to get late breakthroughs, it wasn’t enough to stop the flurry of runs from the Bangladesh batsmen. With any change highly unlikely, Mohit could miss out owing to his expensive outing in the last game and Dhawal Kulkarni could be an option of his perfect replacement. However, if Binny makes the cut for Jadeja, it’s Akshar Patel who gets in for Mohit. 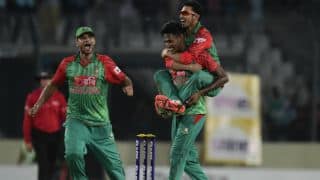 Confident ‘Bangla-Tigers’ will go for the kill 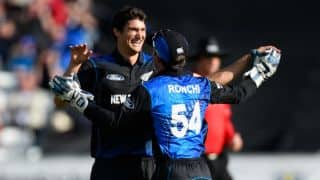