India vs Bangladesh, T20 World Cup 2016, Match No.25 at Bengaluru: Virat Kohli vs Mustafizur Rahman and other key battles

India will collide with Bangladesh at the M.Chinnaswamy Stadium, Bengaluru in the Super-10 stage of the T20 World Cup 2016. The Group 2 teams will aim to find spot in semi-final. Bangladesh did enter the Super 10 stage with much confidence after being named the runners-up in Asia Cup T20 2016, unfortunately were unable to carry forward the momentum in following matches. India, coming with expectations and hope of winning the T20 title this year, faced disastrous start against New Zealand. But they did manage to taste their first victory against arch-rivals Pakistan. This becomes a must win match for India to stay in the tournament while Bangladesh are hoping find ray of hope to come alive. Here are the possible key battles to be witnessed as India and Bangladesh lock horns at Bengaluru. FULL CRICKET SCORECARD: India vs Bangladesh , Live Score, 25th T20 Match, Super 10 Group 2, ICC T20 World Cup 2016

Virat Kohli vs Mustafizur Rahman: India’s finest batsman at the moment, Virat Kohli, will be up against Bangladesh’s pacer Mustafizur Rahman. It is not an unknown fact that Kohli loves scoring runs, especially in the crucial stage of the game. Also not to forget, Kohli will be playing at the home venue of his Indian Premier League (IPL) franchise Royal Challengers Bangalore (RCB) and the crowd support might just keep him going. Mustafizur on the contrary, made a decent comeback against Australia, took figures of 2-30. He had missed most of the Asia Cup matches and the first few matches of the T20 World Cup therefore may find it difficult to get back into rhythm quickly but cannot be underestimated. Much so because of his immense bowling skills that were on show against India in the 2015 series. ALSO READ: India vs Bangladesh, T20 World Cup 2016 Match 25 at Bengaluru, Preview: India eye victory by huge margin

Yuvraj Singh vs Shakib al Hasan: India’s hard hitting batsman, Yuvraj Singh has come back successfully in T20 World Cup, providing those much valuable runs on board. Yuvraj and Kohli’s partnership has been lauded in most of the matches, which could be matter of concern for the opponent. But with the all-rounder Shakib Al Hasan on crease and the team’s onus on his performance, Yuvraj needs to be a tad bit careful. Shakib is a very clever bowler who can mix his pace well and can also get the ball to turn a fair bit. Shakib can also add the required runs on board at the time of need for Bangladesh. ALSO READ: T20 World Cup 2016: Virat Kohli key player for India, but cannot take other batsmen lightly, says Shakib Al Hasan

Sabbir Rahman vs Ravichandran Ashwin: Spin has been MS Dhoni’s major weapon from his armoury. And quite undoubtedly Ashwin has been his trump card. He has always kept teams guessing as to when he will give Ashwin his share of overs. Ashwin who has more often than not stepped up to Dhoni’s expectations and his role in the team has a huge variety of balls up his sleeves. Sabbir Rahman, Bangladesh’s aggressive one-down batsman likes to play around with different pace and spinners. If somehow Bangladesh do come up with a strategy to counter-attack Ashwin and not to let him settle, Sabbir could play a critical role with that. ALSO READ: T20 World Cup 2016: Taskin Ahmed’s suspension upheld by judicial commissioner

Ashish Nehra vs Soumya Sarkar: The first few overs of the Bangladesh innings will involve a significant battle taking place between India’s experienced pace bowler Ashish Nehra and Bangladesh opening batsman Soumya Sarkar. Nehra, relishing his comeback into the Indian team, has the role of picking up early wickets for his side and give them a good start. He has done that fairly well over the last few matches whenever Dhoni has shown trust in him. Sarkar, left-hand batsman skills could play an important role with his strokes in power play. Nehra got the better off him in the Asia Cup Final recently and Sarkar would be looking to return the favor when both sides get on the pitch.

Jasprit Bumrah vs Tamim Iqbal: Tamim Iqbal has made successful comeback in the team and is back again as top-scorer in T20Is from Bangladesh. Tamim, who had been in tremendous form in the group stage of the tournament scoring a hundred against Oman and 83* against Netherlands will be a base for him to start in the tournament. Jasprit Bumrah is yet to showcase his talents, after his brilliant spells in Asia Cup 20 2016. He varied his lengths in every game, but found no luck with his techniques. Yet, nobody can forget when Bumrah got Tamim leg-before-wicket in the Asia Cup Final 2016 and that might play on the latter’s mind when they come together.

(Karan Dewan,is a reporter with CricketCountry, loves following and playing sports. He is a Team India fan and loves winning. Follow him on his twitter handle @karan13dewan.) 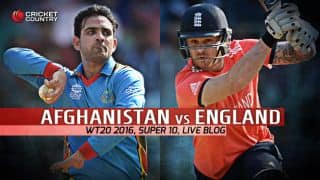