India still have a task in hand to not throw the good start tomorrow and frustrate the Englishmen like they did in their time with the willow.

The second day s play ended between India and England in the first Test of the five-match series at Rajkot. In reply to England s 537, India managed to pile up 63 for 0 till stumps. If Day One was ruled by Joe Root and Moeen Ali, the first two sessions belonged to Ben Stokes century while Jonny Bairstow and Zafar Ansari stuck around adding more miseries to Indian bowlers. However, India have not bogged down completely and was evident with the way they carried their bat in a tough last session s play. This sets up the match interestingly for the remaining days. Aditya Sahay brings out the best moments of Day Two as follows: Live Cricket Scorecard: India vs England 1st Test at Rajkot.

Moeen completed formalities to get a deserving hundred: After England were in a tricky position reeling at 102 for 3, Root was joined by Moeen in the middle after lunch at Day One. The duo were flawless in their approach as they dealt with the spinners with ease, rotated the strike and kept the scoreboard ticking. There were no rash shots as they added 179 runs together before Root departed for 124. Moeen held his end on 99 at stumps on Day One and got to his century in the very first over of Day Two. He looked nonchalant driving Umesh Yadav for a flurry of boundaries before perishing for 117.

Bairstow-Stokes added 99 together: India needed a wicket or two early on Day Two to bounce back in the game and got Moeen quickly after his hundred. They would have expected to spring a collapse after his dismissal but nothing like this happened. After he fell, England s wicketkeeper-batsman, Bairstow and Stokes took on the spinners, especially Amit Mishra, while the Indian pacers did not trouble them either. They added to frustrate the already-struggling Indians and displayed their aggressive intent clearly.

Catches continued to ditch hosts: While England were hammering the Indians all over the park, hosts continued to allow the momentum to remain in visitors hand by dropping many catches. If it was Ajinkya Rahane, Virat Kohli and Murali Vijay dropped sitters yesterday, it was wicketkeeper-batsman, Wriddhiman Saha, who alone dropped two catches of Stokes. Kohli and Jadeja were also slow in their movement as Bairstow gave a chance before he finally departed for 46 off 57 balls.

The number of catches and half chances missed by India surely cost them in the first innings as they remained on the field, trying to dismiss England, for 160 overs.

Stokes joined the party: After Root and Moeen, England had another centurion in the form of Stokes. Stokes came to the middle in the fag end of Day One when England lost Root. The left-hander played with a purpose and valued his wicket as he played the last session carefully and began to attack after Moeen s dismissal on Day Two. Stokes was not afraid to get down the track against Ravichandran Ashwin and Mishra while he pulled and cut with comfort against the pacers. He lost concentration at times but the hosts continued to grasp catches on offer. Nonetheless, he held England s innings and batted well with the tail-enders.

England had lost quick wickets after tea and were on verge of folding up below 500 but Stokes ensured that did not happen. Stokes played a few reckless shots while in nineties but got to a century with a crackling cut off Jadeja. His stay ensured England pile up 500 while Ansari added a crunch 32 to keep Indians on the ground for long.

Indian openers strong reply: After being on the field for five sessions and 160 overs, India would have felt the heat to turn the tides when they were to bat in the final session of day s play. Openers, Gautam Gambhir and Murali Vijay, had a task in hand as India were trailing by 537 runs. Gambhir, still on his comeback trail, along with Vijay who had starts to his name but no big score were to face a stiff session. Nonetheless, both the players looked in full control and played carefully. Gambhir had a few difficulties against Moeen as the track is showing signs of cracking up in the last few days but for India, they went back to the hut without losing a wicket.

Vijay and Gambhir should intent to leave the good balls, keep their shots grounded and resisted edging anything outside off. Vijay nudged the gaps to steer the ball behind the stumps while Gambhir punished everything with a slight margin of error. The duo will have to start from scratch again on Day Three and play positively to get close to England s score. India still have a task in hand to not throw the good start tomorrow and frustrate the Englishmen like they did in their time with the willow. 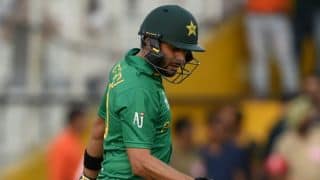 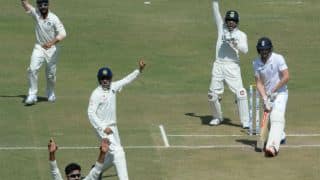