Aggression is a term grossly misused in cricket. You will find every other cricketer talking about being aggressive but not many live up to the bill. In their poorest of state, the haughty Australians tend to recall glory days and challenge the incumbents to do what they did in the past. But for the others, it becomes quite difficult to be aggressive, especially if there is no past reference to it within the camp. But what is aggression? Is it only about a batsman mercilessly smashing bowlers around the park? Or is it about a bowler badgering a batsman with deliveries which he cannot face, and mix it up with verbal barrage? Full Cricket Scorecard: India vs England 1st Test at Rajkot

But if you go ahead and ask two extremely talented English cricketers the two young men who already form the nucleus of the side across formats Joe Root and Moeen Ali will provide a different version of aggression; something which was observed on the opening day of their tour of India which carries massive relevance for both the sides. If India had their pride at stake going into the five-Test series, England too had a lot of questions to answer. The biggest question that England faced was simple: were their batsmen equipped enough with all tools to make runs in India?

This particular question was not for the experienced campaigners in Alastair Cook and Root who invariably get runs. It was for those who have been around for a very long time, but have not necessarily done justice to their talent. Moeen, who has been an indomitable part of the English Test side for more than two years, had come in as a specialist batsman. But as his journey progressed, Moeen got restricted to being their lead spinner and a handy batsman lower down the order.

On the first day of their five-Test series in India, both Root and Moeen provided answers to some extremely pertinent questions. While Root consolidated his highly-regarded position in international cricket as one of the best batsmen across formats with his 11th Test century, Moeen continued to take giant strides as a batsman. Unfortunately, Moeen will spend plenty of anxious moments between stumps on the first day and the first run that he would get on the second day morning.

After all, an overseas century will carry far greater significance than any other score, even 99. Many young batsmen, including Moeen, know the value of the elusive away centuries which do not come often.

The very fact that England were able to dominate India on the first day of the series will give the touring side enough wings to pull the advantage as much as possible in their favour. But the day will remain etched in memories of Root and Moeen for long, since they have given their team an excellent opportunity to push the Indian team out of the contest. They have laid down the foundation for a massive total in the first innings, which is a high possibility since the pitch has not assisted the spinners and England have batsmen till No. 11.

Root and Moeen went about their job on the first day of the Rajkot Test as if they knew their way easily around these lanes. They added as many as 179 runs for the fourth wicket, providing the solidity which England yearned and did that in style. Neither of the two went over-aggressive at any point of time in their innings, in fact, there was that splendid passive aggression which touring batsmen like to stick on to the faces of the home side. A sturdy batting performance, without much hoo-ha is among every batsman s dream in overseas conditions, and Root and Moeen deserved every bit of rich praise that will come their way.

Root fell for a belligerent 124 off 180 balls. The belligerence, however, does not imply that the right-hander was aggressive in his batting. Root hardly hit anything big his innings was studded with 11 boundaries and a six. The highlight was the footwork which looked impeccable, the ability to rock back on short deliveries to nurdle them around for runs, to find gaps, and to keep running hard but at the same time, intelligently. The Indians were also contributive towards the English cause.

What underlined Root s passive aggression was his celebration of getting to his first Test century in India and becoming the first touring batsman since 2013 to do so. Having completed a run, there were neither any frenzied punches in the air nor any yell of celebration: Root kept taking paces towards his batting partner, took off the helmet, and with a lot of power and aggression, he whirled the bat inside out looking towards the dressing room. Had there been either of David Warner or Virat Kohli, there would surely have been a come on! , but not with Root.

Of the two, it was Moeen who at times tried being animated, but he had the luck in his favour as the left-hander was able to hit the ball in the air quite a few times and remain safe. Especially against Ashwin, Moeen was able to hit a few down the ground in the air. Towards the end of the day, Moeen not only remained just one run away from his fourth Test century, but he ended up making an extremely strong statement of being a vital option at No. 5 for England on the road ahead.

Root and Moeen s silent but determined approach on the first day underlined the importance that England have put forth on this tour. They are already an extremely dangerous Test side having decked up their ranks with a lot of talent, but not using any of it especially in the time of need could be daft. England have the right attitude, like their captain, to keep the head down and work hard, which helps the churn out special performances as the one which they dished out to India at Rajkot. 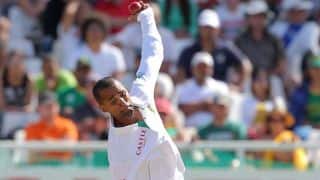 Robin Peterson announces retirement from all forms of cricket