Dominant India will hosts England for the first and maiden Test at Saurashtra Cricket Association Stadium in Rajkot on Wednesday.

When you have two Test teams who have tasted success in the longest format this year, the competition only gets better. Dominant India will host England for the first and maiden Test at Saurashtra Cricket Association Stadium in Rajkot on Wednesday. This engrossing contest between these teams gets further intensified, especially after visitors beat the side at home four years ago. In 2012, the tables turned around once again when England won the series by 2-1. Then it was Graeme Swann and Monty Panesar who were the face of England s triumph. This time, with new faces and some experienced lot, England will once again to turn the tides against India. Full Cricket Scorecard: India vs England 1st Test at Rajkot

England, Pakistan and Australia are just 10 points away from grabbing the No. 1 spot. However, if India manages to draw the series against England, they will still continue to rein at the top irrespective of the outcomes of the other series. All the teams have a gruelling Test season in their agenda, which increases the competition for India. England drew their previous two Test series against Pakistan and Bangladesh. The only victory they achieved this year was against South Africa and Sri Lanka. However, the difficulties they faced against the spin attack in Bangladesh, proves to be worrisome for the visitors.

England have already announced the top-order they plan to play against India, with 19-year-old Haseeb Hameed making his debut. But with Indian condition favouring spinners, England will have tough call picking the right one against the spin dominant India. England do have the services of Moeen Ali, Adil Rashid and newbie Zafar Ansari to the side. The latter made his debut against Bangladesh, now has the chance to shine on his debut series in India. It is also the 100th Test for pacer Stuart Broad and with speculations of his presence/absence in England side still a question mark, this time also a golden opportunity for the pacer to prove his stance.

Here are the possible XI that captain Alastair Cook might field against India in the first Test at Rajkot:

Top-Order: The top three batsmen have been the major boosters for England in every Test series. However, with absence of Alex Hales as the opener, Alastair Cook has called upon the services newbie Haseeb Hameed to open the innings alongside him in the first Test. Firstly, speaking about the captain, Cook is set to break Michael Atherton’s record of 54 Tests as England captain when he leads the tourists on Wednesday. Apart from his captaincy skills, Cook has been effective with the bat and one cannot forget his debut against India at Nagpur, where he scored a fifty and a century in 2006. It was in the last Test against Bangladesh that he went all guns blazing in the second innings of the second Test and ended with average of 50.42.

Hameed will be the youngest debutant for England since the late Ben Hollioake in 1997, who was 19-years-old then. Hameed averages 50 in Division One f the County Championship and to achieve that feat in this age, is incredible indeed. Entering at No. 3 will be England s run-machine Joe Root. incidentally, Root too made his Test debut in India in 2012 and was at his best with knock of 73 then at Nagpur. He had an ordinary outing against Bangladesh, scoring just 98 in four innings at 24.50. He would surely want to improve on those numbers against India.

Middle-Order: England have tons of new faces at their doorstep and are all set to experiment with yet another newbie at No. 4. Ben Duckett, who opened the innings with Cook in the Bangladesh series, will need to use all his fire power in the middle-order, if the top batsmen fail to employ themselves effectively. His resounding time in County cricket, zoomed his entry into the national side. In 2015, Duckett averaged 52.73 and 58.17 in domestic front. His attacking strike-rate of 71 in First-Class cricket and over 101 in List A is easily a threat to Indian bowlers. The Indian spinners will be all set to get their hands dirty, grabbing the wicket of this aggressive youngster.

No. 5 will be England s saviour and all-rounder Moeen Ali. He gave the perfect start in Bangladesh series; however, he dropped to single digits at the end. It was the Pakistan series where he romped at the top with three fifties and a century to his name. To compliment him will be Jonny Bairstow. Carrying the tag of highest-scoring wicketkeeper-batsman in a calendar year, a special spotlight can be thrown on Bairstow. He has amassed 1,118 runs so far in 2016 and the Bangladesh series was stamped his prominence in the middle-order.

At No. 7, it all zeroes down to Ben Stokes. He might have had a nightmarish time during the World Twenty20 (T20) 2016, he has covered it all up in the Bangladesh series. His 85 in the first Test against Bangladesh, proves the calibre he possesses in the middle-order. He was at the top with bowling against Bangladesh and this all-round quality will come into play against India as well.

Bowlers: With Indian conditions favouring spinners, Adil Rashid will be in for a ride. His 4 for 52 against Bangladesh, was enough to prove his expertise in sub-continent conditions. His best figures came against Pakistan that includes 5 for 64 at an economy rate of 3.39 in Abu Dhabi. The numbers 3, 2, 5 and 1 indicates wickets Moeen has picked up in the last four innings, all against Bangladesh. His economy rate of 3.15 in his last Test is enough to keep Indian batsmen wary of Moeen.

Broad, who is set to play his 100th Test, also comes into light. With James Anderson s inclusion under question, Broad will play a crucial role and if he stars in his milestone Test, it will definitely be an icing on the cake. Despite newbie around, England will want experienced player to their side. Gareth Batty is the answer to all. His entry surprised many cricket experts but all did not go well for the spinner who was back after 12 years into the international scene. He ended with 4 wickets in Bangladesh series and will want to better his figures.

Ultimately, it zeroes down to the spearhead of bowlers – Chris Woakes. Woakes has done well with both bat and ball this year. Although, luck did not favour him much at Bangladesh ending with just three wickets, he had the time of his life in Pakistan series.

With batting line-up all the way up to No. 11 and bowling filled with experienced players on the side, despite Anderson s absence, this India series will play a crucial role for the underdogs English players. 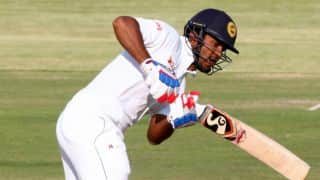