While England just announced on the eve of the first Test that they will hand over debut to teenaged-opener Haseeb Hameed, India are still in a quandary whether to give Test cap to Karnataka batsman Karun Nair or Baroda all-rounder Hardik Pandya.

So, we are done with all the customary pre-series talks and write-ups. It is action time now, as India and England begin their five-Test series India s only five-match series in this long home season with the first Test at Rajkot from Wednesday. The series holds a lot of significance, for India may be a dominant force at home, but they have fumbled against this opposition more often than not in recent past. In fact, they have failed to beat England in last three of their Test series . In 2012, the English side led by their current skipper Alastair Cook had beaten India 2-1 in the four-match series. Full Cricket Scorecard: India vs England 1st Test at Rajkot.

In 2014, after being ahead in the five-match series till the second game, India squandered the lead to lose 3-1. However, a lot of water has passed under the bridge since then. India s captain in all those three series, MS Dhoni is not around anymore. Kevin Pietersen, Graeme Swann and Monty Panesar, the architects of England s win in 2012, are not around either. Virat Kohli, India s current Test skipper is yet to taste failure in a Test series. His side comes into this series on the back of an impressive 3-0 clean sweep of New Zealand. There is thus, every reason to believe that England, and not India, start as the underdogs in this series. LIVE CRICKET BLOG AND UPDATES: India vs England 1st Test at Rajkot, Day 1

Injuries to key players mean that both the sides will be forced to wear new look. While England just announced on the eve of the first Test that they will hand over debut to teenaged-opener Haseeb Hameed, India are still in a quandary whether to give Test cap to Karnataka batsman Karun Nair or Baroda all-rounder Hardik Pandya. Let s take a look at India s likely XI for the first Test and try and figure out the best possible combination India could field in Rajkot. LIVE CRICKET STREAMING: India vs England 1st Test at Rajkot, Day 1

Top-order: In the absence of regular opener KL Rahul and the second best for the role till not too long back, Shikhar Dhawan, Murali Vijay and Gautam Gambhir are likely to play the role of openers in the first Test. Vijay and Dhawan, in fact, were India s first choice openers until recently, before a drop in form for Dhawan opened gates for Rahul. The Karnataka opener grabbed the opportunity with both the hands and after consistent performances across formats, made the opening slot in Tests his own. However, an injury to him ahead of the Kolkata Test brought Dhawan back into the picture.

But as luck would have it, Dhawan not just failed to score, but also got himself injured, opening the doors for Gambhir. The southpaw, who returned to the squad after a gap of two years, scored 29 and 50 in the final Test in Indore and managed to get himself ahead of Dhawan in the pecking order. This was established when the Indian squad for first two Tests against England was announced, with Gambhir finding a place in the squad. He, along with Vijay, will open the innings for India with No.3 being a no-brainer, as local hero Cheteshwar Pujara will follow them in the batting order.

Middle-order: Skipper Kohli will bat at No.4. The charismatic captain, who has had a fantastic 2016 so far, will form the backbone of this batting line-up. He started the year with a tremendous run in the shortest format, scoring runs in Australia, Bangladesh and in India during the ICC World T20 2016 and the IPL. He has also done well in whites, bringing in both his career double tons this year. Kohli is in fact the second most run scorer across formats in 2016 with 1,940 runs to his name from 32 games at a majestic average of 80.83. Only 139 runs separate him from the top placed Joe Root.

He is in with a great chance to topple Root from that position in the next five Tests. Following the skipper in the batting order will be his deputy Ajinkya Rahane at No.5. The Mumbai batsman did not have a good outing in the One-Day Internationals (ODIs) against New Zealand recently, but he has been a force to reckon with in Test cricket and is likely to play Indian middle-order s batting mainstay in the series.

Lower-order and all-rounders: Debates begin once we come to the lower-order. Rohit Sharma, who played all the three games against New Zealand at No.6, has been ruled out of action for at least 6-8 weeks. There are two contenders who can possibly replace him Nair and Hardik. If India go with the same 7-batsmen theory, Karun may come in as a like-for-like replacement. However, if India opt for a 5-bowler theory, all-rounder Pandya can make the cut as the second pacer, making room for three spinners. There is a possibility of the latter happening, with Ravichandran Ashwin batting up the order at No.6 as usual followed by wicket-keeper batsman Wriddhiman Saha at No.7. The next two slots are likely to be taken by Pandya (No.8) and another local lad Ravindra Jadeja at No.9.

Bowlers: All eyes will be on Indian spinners, who will take the centrestage. Ashwin and Jadeja are likely to dominate the proceedings in the series and influence its outcome as well. Pandya s inclusion in the side gives Kohli the option of playing the third spinner in Amit Mishra. A leg spinner is always an attacking option for the captain and Mishra being an aggressive bowler, gives Kohli that edge in the field. If India want to play aggressive cricket from the beginning, playing 5 bowlers and 3 spinners is the way to go. With Mishra at 10, we are left with the final spot in the XI to be taken by a fast bowler.

It will be a toss-up between Ishant Sharma, who is making a comeback after suffering from Chikungunya, and Mohammed Shami. Ishant has been India s pace spearhead in Tests. But Shami has done well of late and the decision to pick between the two won t be an easy one for Kohli. 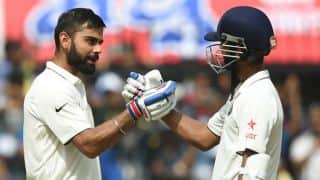 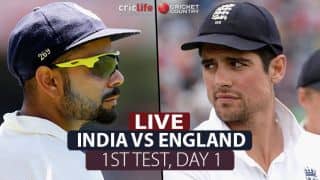