India s five-Test series against England was always going to be the toughest, but quite staggeringly, the hosts ended up making a horror start to it.

Jimmy Neesham remained one of New Zealand s biggest hopes on their tour of India, and the burly all-rounder did live up to the expectations with a couple of half-centuries. Back home, Neesham is enjoying playing for Otago. On Wednesday, as India proceeded ahead in their season taking on England, the all-rounder took out some time to catch up with live action. The greenish tinge on the Rajkot pitch for the first Test attracted Neesham s attention, and as usual, followed an amusing tweet. After all, New Zealand never got a wicket to bowl on which had some amount of grass on it. The Kiwi jealousy was apparent, and so was India s erroneous approach to the big game. Full Cricket Scorecard: India vs England 1st Test at Rajkot

India s five-Test series against England was always going to be the toughest, but quite staggeringly, the hosts ended up making a horror start to it. Indian fielders dropped several catches, and there were plenty of mistakes while bowling and fielding, which assisted in England taking the game away from them. Having fixated them at a strong position of 311 for 4 at the end of the first day, England will now aim for total in excess of 500 since they bat till the end, and pile up misery on Indians who looked sapless throughout the day.

India just did not have a forgettable day on the field; they made mistakes grave enough to have long-lasting effect. Even though it was amply clear that the spinners will have a major say in the series, the hosts dished out a pitch which had a lot of runs and grass that did not favour spinners. Maybe, India would have kept in mind the threat that English seamers and spinners pose, but then, there was no reason for them to have played poor cricket throughout the day.

The first day of the series for the hosts began with three catches being spilled inside first six overs, and the highlight of the second session wherein England added 107 runs without losing a wicket was the rotation of strike. The fast bowlers were very unlucky in the first session, and neither of the Indian spinners were ready to change their plans on the way. For a very long time, in fact, for the majority of the day, Indian spinners kept bowling slow and short.

Moeen Ali, who remained unbeaten on 99, usually had more than enough time to go back on backfoot to defend or push the ball around for singles. Joe Root, on the other hand, was happy to get at least six full-tosses which he was able to put away for boundaries. The footwork of the two English batsmen remained exemplary, and the Indians failed to think on their feet as far as their bowling strategy is concerned.

Going back to the pitch that was prepared for the first Test, there are some serious questions. While the extent of hosts influence on preparing wickets is not completely known, leaving grass on day one wicket with a quality seam attack in the opposition camp is nothing but self-expose to great risks. But the wicket also had a lot of runs, which Alastair Cook, a seasoned campaigner, was quick to see and knowing his team s strengths of batting deep with a lot of discipline, there was no hesitation in batting first after winning the toss.

What was the most disappointing aspect of India s display on the first day was their fielding. Even though there were a few edges that did not carry to the slips, India failed to recognise the true nature of the pitch. The wicket remains conducive to batting, and on such tracks, the bowling side needs to grab the smallest of opportunities that come their way. Unfortunately, India spilled everything.

It was not just the dropped catches early on in the innings. Throughout the day, Indians looked lousy in the field, and appeared as a bunch which was forcefully asked to turn up for a contest. There were half-hearted dives which resulted in boundaries, and painful chases of the leather ball, waiting for it to slow down with the help of grass so that it could be picked up and returned back to the middle of the field.

On a day when India were supposed to get everything right, they got everything wrong. Amit Mishra, who bowled plenty of full-tosses, was given only 10 fruitless overs out of 93 that India bowled. Mishra was coming off a terrific performance in the final game against New Zealand, and a wrist-spinner was anticipated to do more on a benign track than the others. However, India did not believe in the full and optimum use of their match-winning option.

On their part, both Ravichandran Ashwin and Ravindra Jadeja looked unimaginative. These two quality spinners have the reputation of destroying opposition attacks on supportive wickets, but Rajkot presented them a challenge to take wickets where batting was easy, especially with no turn on offer. India would have expected Ashwin and Jadeja the local boy to devise their strategies accordingly, but they failed to create any amount of impact on the proceedings. If Mishra was guilty of gifting England far too many lose deliveries, Ashwin and Jadeja were too slow through the air and bowled short. When Root and Moeen started looking settled at the crease, men around the batsman were taken off to cut down on run-scoring.

India s poor approach has certainly landed them up in a precarious position. From a team that had not kept a foot wrong in the recent past; the first day at Rajkot will serve big lessons. To beat a high-quality team like England, India will not only have to be at the top of their game, but will also need the external factors such as pitches to act in their favour. As of now, England can be said sitting pretty in the driver s seat, looking to bat for the majority of the second day and challenge India with a massive first-innings total on the board, which none of India s past four opponents have done in the last one year or so. 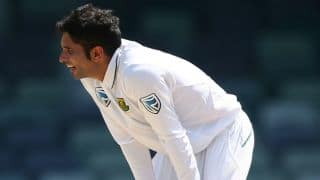