India won the match by 133 runs (D/L method) and ended their losing streak.

India finally beat England as they clinched the second One-Day International (ODI) at Cardiff by 133 runs (D/L method). It was a game dominated by India as they gave England no chance; thereby sealing a comprehensive victory. Nishad Pai Vaidya revisits some highlights of this game.

India beat England by 113 runs (D/L method) in the second One-Day International (ODI) at Cardiff. With this victory, they took a 1-0 lead in the series and would be confident of doing the job in the upcoming matches. It was a much needed victory for their confidence, which was shaken after the battering in the Test series. Let us revisit some highlights of this game:

England bowlers apply pressure: England’s opening bowlers put India under pressure. With some movement in the air, Alastair Cook backed them to come good in those conditions and they did not disappoint. Rohit Sharma played and missed early on. Shikhar Dhawan also had a troubled stay and that did not last long. Virat Kohli tried to break the shackles, but was caught at mid-off.

Rohit Sharma and Ajinkya Rahane attack: As soon as James Anderson and Chris Woakes were taken off the attack, Rohit and Ajinkya Rahane started to feel a lot more comfortable. They started playing more positively and increased the run-rate to help India motor along quite well.

James Tredwell hits back: There was a touch of complacency with the way Rahane and Rohit got out. However, James Tredwell should be given credit for that. Rahane was stumped when he tried to defend one with the straight bat and dragged his foot out. Rohit charged down the ground and tried to clear the long-off boundary, but found the man.

Suresh Raina brings positivity: Though wickets had fallen, Suresh Raina maintained a very positive approach and attacked the bowling. Some of the shots he played down the ground were impressive as he went through the line. But, one highlight that may impress many was the fact that he dealt with the short ball very well. One of them went for six as well.

The debutant impresses: Though Alex Hales slowed down later in his innings, he was very positive to start with. He played quite a few crunchy shots through the off-side and was threatening to set the pace for England. With Cook struggling to get going at one end, Hales’ innings gave England some hope when he got going early.

Mohammed Shami takes two in an over: The over that brought India right back in the game. Cook walked across his stumps and was trapped leg-before. Replays did suggest that the ball had pitched outside leg, but there is no DRS. Then Ian Bell lasted only two balls as he left the second. The ball cannoned into his stumps as he didn’t expect to hold its line.

Ravindra Jadeja strangles the middle order: Ravindra Jadeja went through his overs very quickly and got the wickets for his captain. Hales, the set batsman, was dismissed while attempting a sweep. Jos Buttler went a couple of overs later when he spooned an easy catch to cover. Though Eoin Morgan and the all-rounders fought, the task was too big for them. Jadeja came back to take two more as India wrapped it up in style. 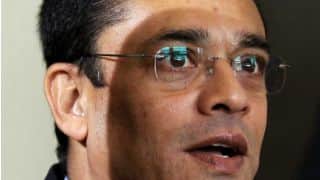 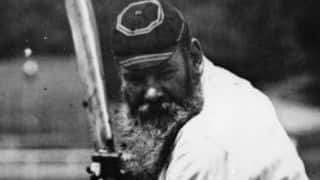