India pulled off a historic victory at Lord’s — perhaps the greatest in their history — to go up one-nil in the ongoing Pataudi Trophy.  Abhishek Mukherjee rates the Indians on a scale of 10.

One may argue that Ishant Sharma had only one contribution of note in the Test — but what a contribution it was! Witnesses of the Ishant blitz will perhaps talk about this spell to their grandchildren. Seldom has an Indian bounced out an opposition at their den in such an emphatic manner. Only time will tell whether this will remain as a one-off or a trigger for things to come; as of now, let us hail what was arguably the most devastating spell by an Indian fast bowler overseas.

Bhuvneshwar Kumar kept on finding new ways to get into the record books at Lord’s, but this article is not the place for that. He claimed six wickets in the first innings, and contributed with contrasting innings of 36 and 52. He seems to mature with every Test, and if he lives up to his promises, India will perhaps find their elusive seaming all-rounder.

Few would have given Murali Vijay a chance of a long run at the top, but he has done more than enough to cement his place from the South Africa tour. He had scored a hundred at Trent Bridge, and after a semi-failure of 24 in the first innings, he solidified the Indian second innings with a potentially match-winning 95. What was more, he also took his first Test wicket — that of Moeen Ali — at a crucial juncture of the Test.

Rahane had a raw deal in the second innings when he was wrongly given caught off the arm-guard by Bruce Oxenford; that did not, however, take the sheen of the first essay when he etched his name on the Lord’s honours board by scoring 103 and helping lift India from 145 for seven to 295. It was the innings that set the foundations for the historic win.

They call him Sir, but they have also criticised the selection committee for persisting with him in the longer version. Finally he came to party in the second innings with a rollicking maiden Test fifty when he launched a furious onslaught on the English attack before falling for a 57-ball 68. He stepped out against James Anderson and Stuart Broad and treated them with disdain, taking the challenge back to the English side. He also did a commendable job of keeping the runs down in each innings and finished with three wickets.

Once again Cheteshwar Pujara found starts, but once again he could not make them count. He could be forgiven for the first innings (where he faced a ripper from Ben Stokes), but the second innings dismissal was irresponsible and reckless, to say the least.

MS Dhoni failed with the bat, took six catches in the Test, and conceded 18 byes — but none of these were the factors that marked him out in the Test. As per Ishant’s admission, it was Dhoni who insisted he kept on bouncing at the English; Ishant had hesitated, but eventually relented — and the results showed.

Outstanding performances from Ishant and Bhuvneshwar put Shami in the background, but he played crucial roles in each innings, often beating the bat and taking out a wicket in each innings. He also played a crucial cameo in the first innings, helping Rahane put up valuable runs.

Shikhar Dhawan has probably been given a rope too long. He looked fluent and potentially dangerous in the second innings, but it would take more than that to keep his place in the XI and keep Gautam Gambhir out of contention. He also rolled his arm over for one over where there could have been at least two close calls: it was just that the Indians did not appeal loudly enough.

Poor form had to catch up with him at some point of time with Kohli; one can only hope that it does not last long. He had started to look confident in the first innings before Anderson removed him with a peach; the second innings dismissal looked terrible, when he shouldered arms to one from Liam Plunkett.

The weakest link of the Indian side in the Test, Stuart Binny had not shown any promise with the bat in either innings. The shot he fell to in the second innings was irresponsible to say the least, and he was ordinary to the ball as well. He should ideally have got a zero, but gets half a point for his spectacular celebration following the most important catch of the second innings.

(Abhishek Mukherjee is the Deputy Editor and Cricket Historian at CicketCountry. He blogs here and can be followed on Twitter here.) 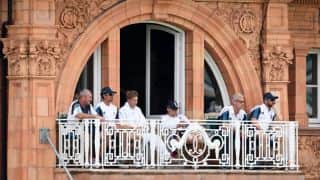 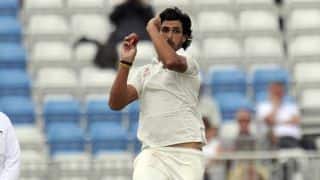