Though India are behind in the game, they can still manage a draw.

With eight wickets on a batsmen-friendly pitch, England would be delighted to get a result out of this Test. But India still have it in them to bat out for a draw, feels Abhijit Banare.

England have won all the nine sessions across the three days at Southampton. They picked eight wickets and are in a good position to enforce a follow-on. But when Ajinkya Rahane spoke after the match, he was least worried about it. While he cursed himself for throwing his wicket away, he wasn’t too concerned about the follow-on issue. This could just be one of those matches where winning sessions may not reflect in the eventual result as India still have a reallistic chance to eke out a draw.

Tricky issue for Alastair Cook! It’s said that the pitch might offer assitance to spinners later in the Test. In that case, if England do enforce a follow-on, they will end up batting fourth and they’ve already seen the problems created by Ravindra Jadeja. A handy lead could still keep England in check. Meanwhile, not enforcing a follow-on would mean, England have to post another 200 at least to feel safe to declare. This would possibly give them more than four sessions to bowl India out. With Moeen Ali not a specialist spinner, England will be dependent on their pacers. It will be a similar situation if India do scrape past 359 and avoid follow-on. In the current situation, enforcing a follow-on could be their best chance to win it. The pacers have done well and India would be under more pressure to play for survival if they are made to bat with six sessions left rather than England batting now and giving four sessions to India in the end.

Time and pitch easy for India?

Right from Day One, the pitch was not the centre of attention as England scored at ease. Going by their performance in the previous two matches, this was one wicket where Indian batsmen could feel comfortable. Yet they kept pegging themselves back, losing wickets after constructing budding partnership. After stumps, Stuart Broad still believed that this is a very good batting wicket. Going by the standards of Indian batting, they will be confident of batting the team to safety. Three of the middle-order batsmen got themselves out in the first innings. In the second essay, one can expect them to be much wiser. India do bat deep with Bhuvneshwar Kumar being a reliable No 9.

England will be heavily dependent on James Anderson and Stuart Broad to swing things their way. With pitch not threatening, and Chris Jordan looking out of sorts, the senior duo would be the key. As far as Moeen is concerned, attacking him consistently would be the last thing on India’s mind. If they manage to see out the leading England pacers, the situation might not be as tough as it seems right now.

Partnerships the key for India:

This is one of those matches where India can still proceed comfortably without any big innings from an individual player. Those 40-run partnerships can still be valuable as they not only help India bide the time, but also take them closer to the target or set one. Since the wicket is not trecharous or offering swing, these are conditions where most batsmen can play cautiously and survive. 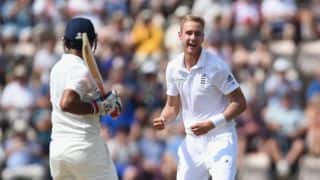