Vijay and Pujara have amassed 1080 runs together with an impressive average of 67.50 in 17 innings.

Statistics show that Cheteshwar Pujara and Murali Vijay have been the most prolific partnership in Test cricket for India since the retirement of VVS Laxman and Rahul Dravid. It isn’t only about the statistics, but in tandem, the duo has inspired confidence with some solid performances. Nishad Pai Vaidya writes why Pujara and Vijay are India’s most dependable firm in recent times.

Sachin Tendulkar, Rahul Dravid and VVS Laxman formed the crux of the Indian batting, with the fate of the team depending on the trio. Time and again, they constructed partnerships that defied the opposition and helped set-up victories or save Tests. But, in 2012, Dravid and Laxman called it a day, thereby ending an illustrious association. A group of youngsters then took over and have since strived to emulate the legends of yesteryear. As a partnership, Cheteshwar Pujara and Murali Vijay have been the torchbearers of the new era in Test cricket.

Yes, Virat Kohli is the biggest star in the younger lot. But, as a partnership, Vijay and Pujara have flourished more and they inspire that confidence as a pair. The opener and the No 3 have boundless patience couple with the ability to pick up pace with an array of strokes. In them, India have found solidity at the top, with Shikhar Dhawan still coming to terms with the challenges of being an opener in Test cricket.

The numbers reflect the fact that Pujara and Vijay have been India’s most prolific partnership in Test cricket since the retirements of Laxman and Dravid. Here are the numbers:

Kohli and Pujara have averaged higher than the latter’s stand with Vijay. However, Vijay and Pujara have been the most prolific partnership. In 17 innings, they have already notched three century and four fifty-plus stands. At that crucial phase, they often weather the storm and then set the tone for the innings. It all started during the series against Australia in 2013, when they constructed a mammoth stand at Hyderabad.

Though the statistics may reflect the highest of 370, they don’t always measure the value of a particular partnership. Take the example of their partnership at Lord’s in both innings. In the first innings, they took on the bowlers and the green surface to see off a difficult period. Though Vijay scored only 24 and Pujara got 28, it is in no way a reflection of the importance of those innings. Even in the second essay, they were as solid as ever, to set the tone for India as they set a total for England. They also had two good stands at Nottingham.

Thus, in the face of the huge total at Southampton in the third Test, Vijay and Pujara have to play a big role to ensure India fight back. Time and again, they have played a crucial role for India, more so in England. With Dhawan gone early, India are under a bit of pressure. Kohli is yet to get into his best touch and hence the onus lies on Pujara and Vijay to make things comfortable for India. 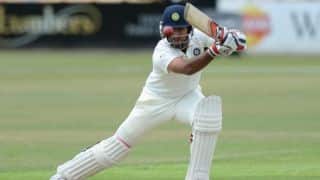