India vs England 2014, 4th Test at Manchester: MS Dhoni shows that technique is not everything

India vs England 2014, 4th Test at Manchester: MS Dhoni shows that technique is not everything

MS Dhoni played a captain's knock to save India from a humiliating sub-100 total.

MS Dhoni’s terrific 71-run knock was the sole bright spot in India’s abysmal showing against England in the fourth Test at Old Trafford. After India lost four wickets with just eight runs on the board, Dhoni dug deep and played a true captain’s knock that saw India reach 152. Shiamak Unwalla looks at the innings that helped India reach triple figures.

The front foot didn’t quite come forward far enough. The top hand wasn’t nearly as firm as the bottom one. The short balls were played more with the body than with the bat. The leaves were tentative. There were a few uncertain prods when the ball was pitched just outside off stump. But then there was the unflinchingly calm demeanour, even at eight for four. There was the determination to not get bogged down. There was the courage to stick it out.

Gautam Gambhir, India’s comeback man was dismissed early. Murali Vijay, their leading run-scorer of the series, was out for a duck. So was Cheteshwar Pujara, also known as ‘The Wall 2.0’, and Virat Kohli, who is  largely considered as the best batsman across formats in the country. And here was Dhoni, who prefers to batting down the order in the featherbeds of India, coming in at No 6 in the sixth over at Old Trafford. A man whose technique is considered questionable, to say the least. A man who scored 71 invaluable runs out of 152.

MS Dhoni has been called many things over the course of his Test career. One of those allegations was that he is a defensive captain. Yet he chose to bat first in torrid conditions, having played five bowlers, with the hope that his batsmen would weather the inevitable early storm. His batsmen failed in the most overwhelming way possible, and he was required to save a ship that was threatening to sink for a sub-100 total.

It was an innings that will most certainly be counted among Dhoni’s most gritty, determined ones — which is saying something, because Dhoni has played quite a few of those in his time. What stood out was Dhoni’s unwavering concentration. He realised very early on in his innings that playing the ball with the bat was risky; better batsmen than he had edged to the slip cordon. So Dhoni put his body on the line. On one occasion, James Anderson bowled a short ball and Dhoni let it hit his shoulder. He repeatedly absorbed deliveries on his forearm, shoulder or hip. Never mind the bruising he is undoubtedly going to wake up with tomorrow morning, at least the short balls were blunted.

Ajinkya Rahane was solid and attractive for as long as he was batting till he drove without moving his feet. Ravichandran Ashwin was arguably India’s most confident batsman till he was out hooking needlessly. But Dhoni — awkward, ugly, bottom-handed, and technique-less —played on amid the ruins. When he finally was out, smashing a delivery straight to the man at midwicket, it was because he was batting with the No 10 batsman who was only batting at that position because Pankaj Singh was the man slotted to to walk down from the pavilion last.

Whether India wins this match — which looks highly unlikely at the moment, but stranger things have happened — or not, this innings from Dhoni will be one that will be remembered for a very long time for being a captain’s knock that truly led his team from the ashes.

(Shiamak Unwalla is a reporter with Cricket Country. He is a self-confessed Sci-Fi geek and Cricket fanatic who likes to pass his free time by reading books, watching TV shows, and eating food. Sometimes all at the same time. You can follow him on twitter at @ShiamakUnwalla 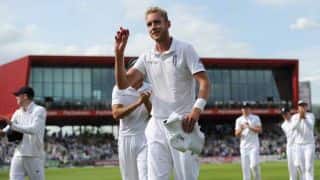 India vs England 2014, 4th Test at Manchester: Highlights from Day One 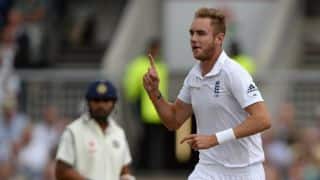