Come the World Cup 2015, England will remain an unpredictable side.

England fate in the One-Day Internationals (ODI) against India was similar to the one they inflicted on the visitors in Tests. With the World Cup 2015 coming in less than a year, England do have some aspects in their favour which wasn’t visible in this series. Abhijit Banare looks at a few positives for them.

If there was a surprise call from International Cricket Council (ICC) that the World Cup has been rescheduled to next month then chances are that Zimbabwe would fancy thrashing England. Such has been their performance in limited overs. They are themselves to blame for not taking the white-ball cricket seriously. The performance against India was only a by-product of carrying the Test mindset to the ODIs. Former players have been liberal in criticising the team and have already ruled them out as contenders to win the World Cup. Yes, England’s ODI record has been abysmal but there have been a few positives they can look forward to keeping an eye on the World Cup.

Moeen Ali: The slim, bearded all-rounder has turned out to be worth in gold for England. A country which has dug deep and failed to find a spinner suddenly has been gifted with one who can pick wickets and also bat well. More than the player himself, its how England team management handles will be the key. The moment he did well at Edgbaston he was pushed to No 3. They need to have some goals set for Moeen the player rather than squeeze as much as they can from him.

Abilities of Joe Root: The century in the final shows the difference a player like Root can make. Just like Virat Kohli’s poor form hurts India’s chances, Root’s batting too has an impact on England’s fortunes. A lot would depend on how he maintains the form in the ODIs to come this year.

James Tredwell: An unnoticed player in the England XI. Pitch doesn’t matter to him. Tredwell is good at doing what Ravindra Jadeja usually does for India with the bowl – keep bowling at that one spot and tie up one end. Though he didn’t pick many wickets but was successful in keeping a check on scoring rate. In the modern day cricket, even that is a precious skill to have.

England’s defensive approach – a perception? England have been rightly criticised for messing up the middle overs of the matches except the last one. But take a second look and you’ll realise that they do have the right players needed. Joe Root, Eoin Morgan, Jos Buttler is a neat example of ascending order of strike rates. And with Moeen to follow they have a solid middle order. At the top of the order Alex Hales and Alastair Cook make a good combination of defense and aggression with Ian Bell to follow at No 3. Yes, the new formation failed against Sri Lanka and India, but they do have a few matches ahead to prove this combination right; Headingley was one example.

Couple of good all-rounders, some quality aggressive batsmen, two batsmen who can drop anchor, spin options; overall England look to be a complete side that has failed to deliver.

Come the World Cup, they will remain an unpredictable side. It’s up to the team to hold on to its self belief and focus on the process in the remaining months. Nobody expected a young Indian side to win the World T20 2007. There have been many surprise packages in the World Cups. There are a few aspects which are in favour of England and expect them to perform better than the present expectations. 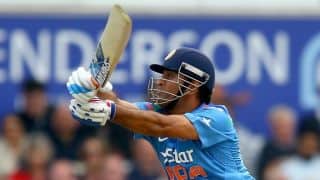