India vs England 2014, only T20I at Edgbaston: Key Battles

India vs England 2014, only T20I at Edgbaston: Key Battles

This will be the last encounter of what has been an intense tour for India.

India will face England in the only Twenty 20 International (T20I) at Edgbaston on Sunday. This will be the last encounter of what has been an intense tour, with both sides gaining the advantage over each other at different times. Sameer Jha takes a look at some of the key battles that fans may get to see in the last game of this gruelling tour.

Alex Hales vs Bhuvneshwar Kumar: If Alex Hales manages to get himself in the kind of zone he was in during the ICC World T20 2014 match against Sri Lanka, MS Dhoni and his men will have plenty of problems. However, Bhuvneshwar Kumar will try every means possible to send Hales back to the pavilion as soon as possible. The 24-year-old Indian medium pacer did not take too many wickets, but was consistent with his discipline. He bowled exceptionally well in the fourth One-Day International (ODI), where he took two wickets for 18 runs in eight overs. Bhuvneshwar also took the wicket of Hales in that match, and will hope for a similar thing to happen at Edgbaston too. He will try to move the ball into Hales.

Eoin Morgan vs Ravichandran Ashwin: Eoin Morgan was dismissed by Ravichandran Ashwin in three out of the four innings in the series, and the England T20 skipper will certainly look to address his weaknesses against the spinner. He is certainly capable of unleashing a wide array of shots, and Ashwin will do well to not concede many runs while bowling to him.

Ravi Bopara vs Ravindra Jadeja: Ravi Bopara was not included in ODI squad, and he will certainly look to prove a point to the English selectors at Edgbaston. Ravindra Jadeja, whose spat with James Anderson was one of the biggest highlights of the tour, will look to prevent Bopara from making any statements with the bat and end his long tour to England with a good performance. Bopara is nimble on his feet and proactive at the crease. Jadeja doesn’t like to give away too many and that should make this a good contest.

Ajinkya Rahane vs Steven Finn: The tour to England might have been a mixed one for the Indian team, but it has largely been a good one for Ajinkya Rahane. The 26-year old scored a wonderful hundred in the fourth ODI at Edgbaston (where the T20 match will be played), and was the batsman with the most runs in the ODI series despite a duck in the fifth ODI. He’ll look to perform well in the T20 match too, but will face stiff opposition from the lanky pacer Steven Finn. The 6‘ 7’’ tall Finn, has troubled Rahane since they first faced each other and would want to get the better of the Indian batsman.

Ambati Rayudu vs James Tredwell: Ambati Rayudu replaced Rohit Sharma after the latter was injured, and the 28-year-old grabbed that opportunity with both hands. He scored an unbeaten 64 in the third ODI, and a gritty 56 in the fifth ODI ending the series at an average of 117! He’ll look to continue his good form, but will have to contend with the wily James Tredwell who will look to improve his record in T20Is. Tredwell, has taken only seven wickets in the 16 matches he has played in the shortest format of the game at the international level. Rayudu tries to use his feet to the spinners and Tredwell would want to keep him at the crease.

Shikhar Dhawan vs Chris Woakes: Shikhar Dhawan has had an ordinary tour to England, and he was dropped from the Test side after continous failures. He scored a fluent 97 in the fourth ODI, but the Indian team expects and needs him to perform much more consistently like he did during the ICC Champions Trophy 2013. He’ll look to end the tour on a high, by helping India get off to a flier at Edgbaston. However, Chris Woakes who bowled excellently in the second ODI, and dismissed Dhawan twice in the series will leave no stone unturned to ensure that Dhawan doesn’t get too many.

(Sameer Jha is a reporter at cricketcountry.com. He can be followed on Twitter at @SameerJha) 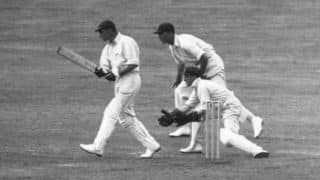 Wally Hammond hits 174 at Bristol in 1924 on an unplayable wicket — the greatest First-Class innings ever played?