With Broad missing out on the third Test, Anderson will certainly have an extra responsibility to take care of.

England are under the pump after losing the second Test at Visakhapatnam and the onus of making a comeback is on their shoulders. They have the psychological advantage in their favour as the last two Test series between these two teams had an analogous outcome, where India lost the series after taking a lead with three games to go. It first happened in India back in 2012 followed by 2014 in England. The ongoing series shares similar fortunes as India once again have the upper hand and England are over the barrel. But unfortunately, their strike bowler Stuart Broad will be missing the crucial third encounter due to a mistimed injury, a factor which will affect England massively. Full Cricket Scorecard: India vs England 3rd Test at Mohali

Broad bowled extremely well in the previous game where he scalped five wickets on a surface which had very less to offer to the seamers. He varied his length beautifully and had enough variations on the red cherry. In fact, his run in the second innings, where he picked four wickets was one of his best in the subcontinent. He carries massive experience on his shoulders and has been a vital cog in the side. With Broad missing out on the third Test, James Anderson will certainly have an extra responsibility to take care of. England also find themselves in a state of dilemma to find a replacement for Broad. If fully fit, Chris Woakes will get a nod or Steven Finn is expected to replace Broad at Mohali but the duty to lead the pace attack will ultimately come down on Anderson. Broad and Anderson have been the pillars of strength for the English bowling attack and like to hunt in pair.

Broad has learnt a lot from the former Indian pacer Zaheer Khan on how to bowl in the subcontinent. He was quoted in a report from IndianExpress.com saying, Zaheer Khan was very good at bowling off pace. Then he d surprise you with a quick inswinger. Jimmy (Anderson) and I have talked about a routine of getting a batsman to face slower pace, then a quicker one on the stumps. READ: India vs England, 3rd Test: Parthiv Patel to replace Wriddhiman Saha

Anderson missed the first Test due to injury but did well in the first innings of the Visakhapatnam Test to have three wickets to his name. He is a deadly bowler if conditions favour him but one can expect India to dish out a less seamer-friendly track at Mohali after the first Test ended in a draw. This Test will surely be Anderson s test of individuality. He has had a good year bagging 41 wickets in 10 outings at 20.82 in the ongoing calendar year.

Something similar happened in the Nottingham Test of the 2015 Ashes, when Anderson was ruled out due to injury in a decisive encounter and Broad had to deliver. The latter did well in marshalling the pace attack and won the game for England single-handedly. In fact, Broad recorded his best Test figures in an inning in that game. England were leading 2-1 in the series with two games to go, a win here would have sealed the five-match series for them. And to everyone s surprise, Broad steamed in and wrecked havoc in the first innings with the new ball. He chipped eight wickets and dismantled Australia for an awful score of 60. He got rid of the top-order in a flash as Australia were at sixes and sevens due to his performance. England won the game by an innings and 78 runs and Broad was instrumental behind this stellar performance by his team. It is often said that pressure brings the best out of many players; this miraculous spell by Broad was a testament to it. He held on to his nerves and delivered when his team needed him the most.

Anderson finds himself in a much pressure situation as his side is under fire and the conditions are lot different from what it is at home. He is a skilful bowler and can win games for his side single-handedly on his day but Mohali will certainly test his abilities. If he manages to step up and get early wickets, England will definitely find themselves in a comfortable position. Anderson s ability to move the ball both ways stands him apart from his peers. He has played a key role in England s rise in Test cricket in the recent times. With an experience of 120 Tests and 467 wickets in his kitty, one can expect Anderson to stand tall in crisis. He needs to vary his length in the subcontinent and bowl as the situation demands. Anderson has been England s most prolific wicket-taker in whites and is virtually unplayable on seaming pitches. His strength lies in his ability to create enough doubts in a batsman s mind by swinging the ball both ways. He puts a batsman into a dilemma of whether he should go for the ball or leave it alone, which helps him get a fair part of the willow. His accuracy is outstanding and needs to replicate a similar magic at Mohali.

The first two games of this series saw some help for the seamers early on in the innings, which Indian bowlers made use of. In fact, Anderson too had a good time in the first innings, which simply means that there has been something to exploit with the new ball. Anderson is indubitably the one of the best new ball bowlers in contemporary cricket and has to bring his best game out at Mohali. He needs to get as many wickets as possible while the red leather has shine on it.

As of now, India are oozing with confidence but the fact that they had lost their last two series after being in a comfortable position is surely looming over their head. The final Test commences on Saturday and England have a long road to travel. But a win here will level the series. 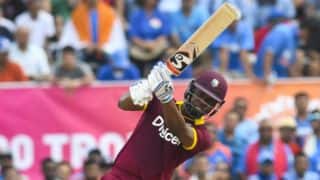