As the teams are all set to face off, here are some key clashes which can be expected during the game.

It is a do-or-die situation for England as they face hosts India in the second One-Day International (ODI) of the three-match series on Thursday. India, banking on the batting brilliance of Virat Kohli and Kedar Jadhav, registered victory in a high-scoring game at Pune as they chased down 351 to gain the lead in the series. England, who were earlier defeated in the Test series 4-0, will seek their first victory on the tour. The all crucial match will be played at Barabati Stadium, Cuttack where India last played a Twenty20 International (T20I) against South Africa, losing it by 6 wickets. India did not have a good time playing at Cuttack in the match as the spectators turned violent after India s shocking collapse and it caused the game to stop for considerable amount of time. As the teams are all set to face off, here are some key clashes which can be expected during the game.

Jason Roy vs Jasprit Bumrah: Bumrah, one of the most talented young pacers India currently have, was hit all over the park by the England batsmen in the series opener, especially by Jason Roy. Bumrah ended up giving away too many runs during in his spell. He is expected to come as the first change and his darting yorkers have caused serious trouble. He will try and dismiss Roy, who will look to continue with his ruthless approach.

Virat Kohli vs Jake Ball: It has been quite out in the open that England are eyeing the wicket of The Run machine , Virat Kohli. Kohli was the rock who stood firm amidst falling wickets and later built match-winning partnership with Kedar Jadhav. Ball, as he said, will attack Kohli with short-pitched balls. It will be interesting to see how the new captain tackles the attack.

Shikhar Dhawan vs David Willey: One of the most impressive among the England bowlers, Willey picked up some early wickets that put India in back foot. He dismissedDhawan. With many players fighting for the opening spot in the Indian team, Dhawan s performance in the second ODI will be crucial for his own career. He will surely have to survive Willey in the beginning of his innings while the bowler will look to replicate his performance in the first ODI.

Eoin Morgan vs Ravichandran Ashwin: Can Morgan be called Ashwin s bunny? Well, the batsman has been dismissed by the ace Indian spinner 6 times so far. Ashwin remained unsuccessful to take any wicket in the first ODI and was hit for a brilliant slog sweep-six by Morgan. Ashwin will eye the opponent leader in the next match. This would not be a bad way to start his account.

England s hunger vs India s confidence: England are yet to bag any victory in the tour and this surely has taken a toll on their confidence. They are hungry to register their first victory while India will be utterly confident heading to the next match.

After reviving from 63 for 4 to go on and win the match, the match must have provided the team with immense confidence. Who will win, England and their intent or India and their self-believe? Only time will tell. 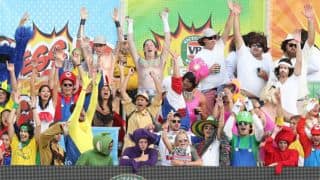