India vs England 2nd Test at Lord's: Indian batsmen need to get act together to avoid frequent collapses

India vs England 2nd Test at Lord's: Indian batsmen need to get act together to avoid frequent collapses

The collapses have become all too frequent in recent Test matches and invariably cost India.

India rejoice the ton scored by Ajinkya Rahane in tough conditions in Day One of the second Test against England at Lord’s. While it was an innings of character and class, it shouldn’t eclipse India’s recent batting worries: collapses have become all too frequent. Nishad Pai Vaidya ascertains that since December 2013, some of the Indian batsmen have done well, but have failed collectively as a unit to help India put up a challenge.

The writing was on the wall! When the world got a first glimpse of the green surface at Lord’s, India was expected to bundle out. Once they collapsed to 145 for seven, it was only a matter of time. However, Ajinkya Rahane stood tall and essayed an innings of true quality on a tough surface, guiding the tail and taking India to a respectable score. His application and tenacity was a great lesson for other batsmen: while he was cautious, he did manage to score at a very good rate. This innings is another proof of his genuine class and talent.

While the Indian fans may celebrate Rahane’s magnificent ton, there are some causes for concern. The collapses have become all too frequent in recent Test matches and invariably cost India dearly. If the bowler’s inability to clean the tail is one headache, the tendency to collapse is something that may only compound problems. Since the tour to South Africa, India have often lost momentum when they looked in decent touch and ready to take control.

The frequency of such collapses may lead you to believe that India have failed as a batting unit on a regular basis. But, if you look at the individual statistics, you would be surprised as they make a contrasting reading. Here is how the Indian batsmen have performed since the tour to South Africa late last year:

*Since tour to South Africa in late 2013. Includes the scores of Day One of the Lord’s Test against England.

Some of the batsmen have done very well and have managed to put up a few good scores. Yet, India have somehow failed to press the initiative and go on to score big. What one can say is that, over a period of time, the batsmen may have done well individually, but if you take it on a match-by-match basis, they have failed collectively. The first innings at Lord’s is just an illustrative example: While Rahane scored a ton, others did not create a big impact. Similarly, in other collapse-ridden innings, one or two players have done well, but others haven’t backed them up.

However, for the ongoing Test, some of the Indian batsmen fell prey to some great bowling. Virat Kohli looked in good touch, but James Anderson’s persistence paid rewards. Cheteshwar Pujara was done in by a beauty from Ben Stokes. Murali Vijay’s innings came to an end with Liam Plunkett stunning him with pace. Such things happen, but they  don’t bode well if they happen consistently. 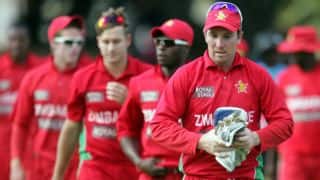