A look at what went wrong for the English pacers and lessons the Indians can learn.

England conceded the home advantage allowing India to sprint from 147 for seven to 290 for nine at the end of the first day at Lord’s in the second Test. With more than lush green grass on the pitch, some of the bowling tactics were baffling. Abhijit Banare looks at what went wrong for the English pacers and lessons the Indians can learn ahead of their chance to bowl.

The curator at Lord’s more than compensated for the dead track at Trent Bridge by leaving the pitch visibly similar to the outfield for the second India-England Test match. There couldn’t have been anything more than this which could be defined as the best home advantage. Yet, at the end of the day, it was India who walked away with the honours fighting back from a precarious stage. Below are some areas which went wrong for English pacers. There’s nothing new to add, but the same old basics which England never quite thought of following.

1) Pitch it up: The green tops are not worth it, if the batsmen aren’t forced to face the deliveries. Cheteshwar Pujara and Murali Vijay were content in leaving the deliveries outside off and get through the first hour of play without taking too many risks. The England pacers bowled it short allowing the batsmen to get away. The moment they got back to fuller line in the second session, India lost four wickets. MS Dhoni, Virat Kohli and Stuart Binny’s dismissal were all because of being a touch fuller.

Bhuvneshwar Kumar is fairly accurate. Meanwhile, Mohammed Shami and Ishant Sharma too need to pick the clue and avoid the same mistakes. By forcing the batsman to play by pitching it up, at least there is a chance of error rather than waiting for a self-induced edge.

2) Gifting runs with loose deliveries is a crime on a green top: To know the value of a run, keep aside Ajinkya Rahane’s innings and watch Pujara’s 117-ball stay at the crease. It was painstaking innings to defy the early demons in the pitch. In comparison, Virat Kohli had zoomed past Pujara in flash with a dolly on the legside and a half-volley on the off right under his bat. England pacers, time and again allowed the batsmen to break away with balls swinging down the leg. The frequency of such deliveries only increased towards the end of day’s play.

India need to be cautious of allowing freebies. The main worry could be Ishant who has the tendency of squandering such opportunities. It’s important for pacers to maintain their discipline once they tighten the screws around a batsman. England allowed Rahane to get away with some easy deliveries which were smacked for four.

3) Attacking field: This is not a bowler’s mistake but they too are responsible for not pushing the skipper to give the field they want. For some reason, third-man seems to be the most unproductive field placement in Alastair Cook’s dictionary. On a wicket like Lord’s, the edges are going to be served at regular intervals. Yet India managed to squeeze a few runs thanks to some holes in the cordon. On some other wicket, one can expect the vacant region to lure the batsman in to playing there. But, on a deck like this, cross-batted shots were never in play. For some reason, Cook struggled to maintain an attacking field. Indian skipper MS Dhoni needs to allow the bowlers to attack and compliment them with a packed slip cordon on this wicket. This is a pitch where the batsmen will not feel settled at any stage. Hence the edges are bound to come.

Lessons not learnt from the Sri Lankan tour: Anderson and co took a lot of flak for refusing to pitch the ball up and force the batsmen play. In contrast, the Lankan pacers – with no knowledge of what English conditions are – managed to follow the basics of bowling it full. Even the medium pace of Angelo Mathews caused trouble when the wicket had a bit of juice in it during the morning sessions. It would be a timely second reminder, if Binny (the Indian equivalent to a bowler like Mathews) manages to strike a few blows. 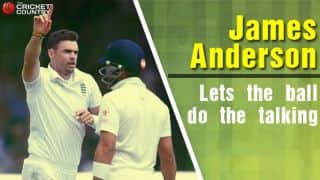 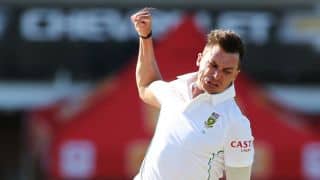