India ended Day Three at 98 for 3 in the second Test against England at Visakhapatnam on Saturday.

Dominant India continued to rattle England on Day Three of the second Test as the hosts ended their day at 98 for 3 with a lead of 298 runs at Visakhapatnam. It started with bowling expertise of Ravichandran Ashwin and ended with India s captain Virat Kohli s brilliance yet again. It was a contrasting day with England s Jonathan Bairstow and Ben Stokes ruling the day with the second half tilting towards India. They are at a position where they cannot lose the game after the hard earned centuries and fifties by Indian batsmen. India also found a saviour with their middle-order batsman Ajinkya Rahane, who has the potential to save his side from the precarious condition. Full Cricket Scorecard: India vs England 2nd Test at Vizag

England might have started tumbling down the crease, but they showed grit and confidence in the first half with some fifties by their middle-order batsmen along with early wickets by their bowlers to shackle top-order of India. Apart from this the only all-round performance that once again shouted loud amidst these was Ashwin s milestone and his fifer that created treble for the opposition. There were some highlights that cannot be given blind eye to on Day Three at Visakhapatnam:

Jonathan Bairstow s comical start to Day 3: It was indeed a comical start to Day Three of the game when Bairstow entered the crease with confidence and warming up, when he was seen tripping, eventually spraining his ankle. He went back to the dugout, getting himself checked by the physio and entering the crease by taking the strike. It turned to be so comical that Twitterati could not contain their funny side and found this to be the best start for England. While some found this made up some were astonished to find him back in full swing, so much so that he got to his fifty effortlessly.

Jonathan Bairstow, Ben Stokes the stroke players: Bairstow might have had a tumbling start to the day but he ensured it was a top-notch game from wicketkeeper-batsman. He not only got to his 1,200 Test runs in a calendar year but also got his 12th fifty. When the team is on the brink of collapse, one expects few to stand tall amidst the chaos. Bairstow hit just 5 fours to reach this stage and stayed longer than his counterpart Joe Root who also departed for 53. Bairstow was grabbed by Umesh Yadav, once again beginning England s collapse.

But there was one batsman who continued his stroke play despite Bairstow s wicket. Stokes also got to his 8th fifty and added 70 runs on board building a healthy partnership of 110-run stand for the sixth wicket. Stokes got 11 fours to reach his fifty in an effortless manner. He also stayed along with new batsman Adil Rashid to boost England further. He built a steady stand of 35 runs to end help England go past the 200-run mark. After Stokes fall, was when England s downfall was officially nearing the end.

Ravichandran Ashwin continues to rule on Day 3: If Ashwin s name is missing on any of the day s play is as equal to spice missing from the game. Ashwin continued to roast England on Day Three continuing his wicket-taking spree and bagging his 22nd fifer along. It did not stop there. He got to his 50th Test wicket in a calendar year right at the second spot, four short of Sri Lanka s great Rangana Herath. With the number of Test series lined-up for India in the coming season, Ashwin can very well go past Herath. Stuart Broad is next in line as he is 8 wickets away from reaching this stage.

As for the runs, he has already completed 400 in total this year that included two centuries against West Indies and a fifty against England. He also holds seven Man of the Series reward to himself with two coming from the recently concluded Test series against West Indies and New Zealand. He is yet to bat in the second innings and maybe, yet another fifer from Ashwin is around the corner.

England bowlers walk past India s top-order: India s opening batsmen have struggled to find their form in the second Test against England. KL Rahul, India s first choice opener as per Kohli s declaration, failed to show any sign of improvement since his first innings as he was dismissed for 10 in the second innings. However, if there is any batsman that has disappointed India was their regular Test opening batsman Murali Vijay. He was excellent in the series against New Zealand but his performance in the second Test has been below par. Vijay was gone for 20 in the first innings and the second saw him being the first one to be dismissed by Broad. The England pacer was the first to draw blood in the first innings and he struck once again, scalping the first wicket for England in second.

When Cheteshwar Pujara entered at No.3, India were once again expecting a high soaring partnership between him and Kohli. They did build a 43-run stand with maximum runs coming from the Indian captain. James Anderson came with a peach of delivery and Pujara was gone for 1. Kohli had to look up to a new partner to stabilise the Indian innings.

Another day, another Virat Kohli master-class: One can easily run out of adjectives for describing India s aggressive yet adaptable batsman. Kohli entered the crease in the first innings when India were two down. He twisted the tales and ensured his 50th Test was rather a special one. He not only got to his 14th Test century but ended up with a knock of 167. This time around, the situation was pretty similar. But his partner Pujara was gone too soon to provide a helping hand.

Kohli entered the crease when India were 17 for 2 and Kohli, literally, ran through the England bowlers. He started with a single boundary in his second over and raced it up with one or two in every over. In no time, Kohli was up for yet another fifty and remained unbeaten on 56. Kohli is supported by partner Rahane and India, will look to end for a target of 450 to gain control in the Test series after a disastrous draw. 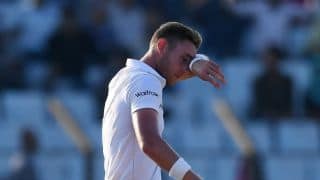