Virat Kohli won the man of the match award for his 167 and 81 in his two innings.

After a stalemate at Rajkot, India went 1-0 up in the five-match series with a comprehensive 246-run win over England in the second Test at Vishakapatnam. India needed eight wickets to win the match on the final day and they got those wickets quite easily as England folded for just 158. For India, their batting and their bowling seems to have clicked in this match and have a lead to carry into the next game at Mohali, which starts in five day s time. While Virat Kohli led from the front with the bat in both innings, it was Ravichandran Ashwin s eight wickets with the ball that halted England s charge. FULL Cricket Scorecard: India vs England 2nd Test at Vizag

England do have injury concerns of their own. Stuart Broad has been ruled out of the next Test, paving way for either Chris Woakes, Steven Finn to Jake Ball to return to the Playing XI. India have no such concerns and will look to increase their advantage in the third Test. Let us take a closer look of how every Indian player fared at Vishakapatnam and rate them on a scale of 10.

Murali Vijay (20 & 2) 2/10: Vijay played extremely well at Rajkot, but failed to replicate his form at Vishakapatnam. He got a well directed short ball from James Anderson in the first innings, which he could not keep down. The ball took his glove and went to the gully fielder. In the second innings, he lunged forward, but caught the inside edge of the bat, on to the pad and Joe root diving forward completed an easy catch at gully. However, he played some delightful strokes in the first innings. He scored a 21-ball 20, which included four sublime boundaries. India will hope that he scores big in the third Test.

KL Rahul (0 & 10) 1/10: Rahul showed impressive form in the Ranji Trophy 2016-17 for Karnataka. In his previous match against Rajasthan, he slammed a fifty and a century, to take his side to a comfortable win. India coach Anil Kumble had said that Rahul, along with other injured players will have to prove their fitness in the Ranji Trophy before they are considered for national selection. Rahul did just that, but he failed to make any sort of impact in both the innings. He fell to Stuart Broad on both occasions, poking at the ball outside off to force a catch behind the wickets. Rahul replaced Gautam Gambhir in this match and did very little justice to his place in the side. READ: VVS Laxman: India s win over England an excellent team effort

Cheteshwar Pujara (119 & 1) 7/10: Pujara carried on his sublime form into this game as well. Having already struck a hundred in the previous two Tests, Pujara once again showed why he is the ideal No. 3 for India, scoring 119 after India had lost a couple of early wickets. He came into bat in the second over of the match and constructed a 226-run stand with his skipper Kohli in the first innings, which turned out to be pivotal. He however struggled to get going in the second innings, bowled by a beautiful delivery from Anderson for a 24-ball 1.

Virat Kohli (167 & 81) 9/10: It was hard not to give Kohli a perfect 10 on 10. He batted beautifully in the first innings, scoring 167 off 267 deliveries with 18 fours punctuating his innings. He followed that up with a brilliant 81 in the second innings on a tricky Day Three and Four surface and it took a brilliant catch from Ben Stokes at first slip to deny Kohli his second ton of the match. However he was given a big let off in the first innings, when he was dropped on 56 by Rashid, proving that he is still susceptible to short deliveries. He also dropped a tough chance of Joe Root at leg slip. Overall, this was one of Kohli s best performances with the bat.

Ajinkya Rahane (23 & 26) 4/10: Rahane got off to starts in both the innings, but failed to capitalise on it. He however played his part in ensuring that he and Kohli put on 68 for the fourth wicket in the first innings and a priceless 77-run stand in the second innings. He may not have scored big, but that fact that he stuck it out during tough times, especially in the second innings was indeed commendable. He had an in form Kohli with him both times and was able to be a steady partner for his skipper. Rahane did not have a good game at Rajkot either and will look to get among the runs at Mohali. READ: Kohli heaps praise on Indian bowlers for win in 2nd Test

Ravichandran Ashwin (58 & 5 for 67, 7 & 3 for 52) 8/10: Ashwin once again proved his mettle at No. 6 with the bat, scoring 58 in the first innings. He followed that up with 5 for 67 with the ball to add icing on the cake. However, Ashwin could not do much with the bat in the second innings, but bounced back with the ball, claiming three wickets in England s second innings. Ashwin struggled a lot to get the wickets of the openers on Day Four, but removed Haseeb Hameed for 25 and then followed it up with Ben Duckett and Zafar Ansari on the final day. Ashwin also went past Sri Lankan spinner Rangana Herath as the leading wicket-taker in 2016.

Wriddhiman Saha (3 & 2) 2/10: Saha had a very poor game. He was out leg before in both the innings. In the first innings it was off-spinner, who dismissed him and in the second innings, it was leggie Adil Rashid, who trapped him in front. Saha used the review on both occasions, but could not overturn the on-field umpire s decisions. Saha however had a good game behind the wickets, taking two catches besides an MS Dhoni-style run-out.

Ravindra Jadeja (0 & 1 for 57, 14 & 2 for 35) 4/10: Jadeja had a poor game till the completion of the first innings of both teams. But his 14 runs batting low down the order were crucial as India went past 200 and therefore set England a target of over 400. He was much better with the ball in the second innings. He made good use of the black patches outside the left-handers’ off stump and got the crucial scalps of Alastair Cook and Moeen Ali as a result. READ: Kohli goes past Azharuddin, king pair for Anderson and other stats highlights from IND-ENG 2nd Test

Jayant Yadav (35 & 1 for 38, 27* & 3 for 30) 8/10: Jayant had an excellent Test debut. He scored 35 down the order in the first innings and then remained unbeaten on 27 in the second innings to push India s lead past 400. Kohli heaped praise on Jayant at the end of the match and he truly deserves all the praises. Jayant got the wicket of Ben Stokes in England s second innings with a beautiful delivery. The ball pitched on leg and middle and then spun to hit Stokes off stump to leave him stunned. He bowled with terrific accuracy and kept the batsmen on their toes throughout the match. He also put a price on his wicket with bat in hand and made life difficult or England.

Umesh Yadav (13 & 1 for 56, 0 & 0 for 8) 1/10: Umesh did not bowl at all on Day Five, but he conceded just one an over in the eight overs. Umesh known for his usage of the long handle, did manage to strike three boundaries in the first innings to keep the crowd entertained. He got the crucial wicket of Jonny Bairstow for 53, after he had put on 110 for the sixth wicket with Stokes. That however is the only wicket Umesh picked up in the whole match in his 26 overs.

Mohammed Shami (7* & 1 for 28, 19 & 2 for 30) 5/10: Shami smashed the first ball he faced in this match for a huge six over long off, off the bowling of Rashid. He carried that momentum with the ball in hand, knocking over (and breaking) the wickets of Alastair Cook for just 2. Shami kept asking questions throughout the match with his immaculate lines and lengths. He also chipped in with 19 in the second innings with the bat. He got both his success in the second innings with the second new ball. He first removed the dangerous Root for 25, trapping him in front with a beautiful inswinger. He sent Rashid packing after he nicked a well directed short ball to the wicketkeeper. Shami played a huge role in ensuring India wrap up the match inside two sessions and his effort cannot be underestimated. 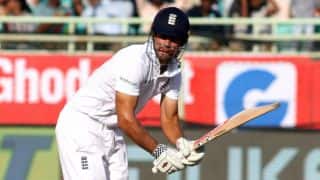 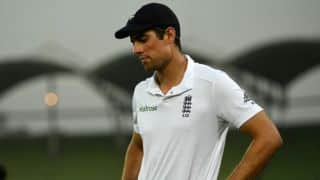