England have already conceded the series, but they will play for pride in the third and final One-Day International (ODI) against India at Kolkata.

England may have already conceded the ongoing three-match ODI series, but they will play for pride in the third and final game against India at the iconic Eden Gardens in Kolkata. Ahead of this game, England suffered a big blow in form of Alex Hales, who was ruled out of the remainder of England’s tour due to a broken hand. Hales suffered the injury during the second ODI at Cuttack, but now he will fly back home to England and might undergo a surgery. However, England have an extremely rich bench strength with Jonny Bairstow and Sam Billings waiting to play their first ODI of the series. On the other hand, with the series already in their kitty after two impressive performances, India will aim to inflict a clean sweep. As expected, the first two ODIs at Pune and Cuttack have been high scoring, and there might be yet another high 300-plus game at the iconic Eden Gardens. Let us take a look at England s likely XI:

Top-order: Jason Roy will once again be entrusted to get England off to a sparkling start, except this time he will have a new opening partner; it will most likely be Billings, who had top-scored in the warm-up match. As a matter of fact, his highest ODI score came against Bangladesh recently when he opened the innings. Joe Root, like Roy, has scored fifties in both the matches. The top 3 will once again have to deliver for England if they are to get a big total on the board.

Middle-order: Skipper Eoin Morgan scored an effortless century under pressure and took England to the cusp of a win in the second ODI. But his 81-ball 102 went in vain, as India held on to win the match and series 2-0. Ben Stokes, Jos Buttler and Moeen Ali make England s middle-order a strong arsenal. They have been inconsistent with the bat, and will look to make a significant contribution in this match as well. If one of these three batsmen are at the crease with 10 overs or so left, England could easily put up a mammoth total once again.

Bowlers: England have players, who can easily bat all the way till No. 10. The likes of Chris Woakes, David Willey and Liam Plunkett give England s batting more depth as well as the runs. Nonetheless, Woakes was easily England s pick of the bowlers in the previous match, scalping up 4 out of the 6 wickets to fall. He got England off to a flying start, removing Shikhar Dhawan, KL Rahul and Kohli in quick succession. He is the only England bowler, with an economy rate of under 6 in this series. Willey was good in the initial overs, but went for runs when brought on to bowl in the latter stages. Plunkett, on the other hand, went for 91 runs in his 10 overs; but if there is grass on the pitch, England will persist with him.

If they feel the need to have another spinner to support Moeen, they might opt for Adil Rashid or Liam Dawson for this game. Jake Ball has had a quiet series, but has bowled well in patches and his best could come in this game. Not to forget, Stokes too can come handy with his seam-bowling. 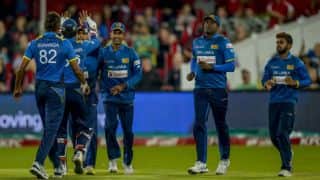