England players expected to take field at Trent Bridge for the 3rd ODI.

India smashed England in the second One-Day International (ODI) at Cardiff to go 1-0 up in the series after the first ODI got washed out. England perhaps need to re-think about their line-up for the third match in order to give India a stiffer competition. Shiamak Unwalla looks at the likely XI for England.

Alastair Cook (c): England’s skipper and opening batsman, Cook has a lacklustre ODI record, and perhaps keeps his place in the side solely due to his captaincy. Given Gary Ballance’s tremendous form in the Test series, it is almost unfair that he does not get to play in the XI.

Alex Hales: The explosive right-hander is one of England’s most exciting players, and someone who can force the pace at the top. In a line-up traditionally comprising of accumulators rather than stroke-players, Hales is the refreshingly aggressive batsman who can put the opposition bowlers on the defensive right from the start.

Ian Bell: Stylish and subtle, Ian Bell has long been England’s most competent ODI batsman. Indeed, he is the currently No 2 on the list of all-time leading ODI run-scorers for England, a fact that seems to go unnoticed by many.

Joe Root: Joe Root has long been one of England’s key players in all formats of the game. His handy off-breaks and tidy fielding make him the perfect ODI player. With the bat, he has the ability to play the waiting game and also score quickly.

Eoin Morgan: Perhaps England’s most accomplished ODI batsman at the moment, Morgan can control the innings in a way few others can. His unorthodox technique and capacity to score off every ball makes him the key member of England’s middle order.

Moeen Ali: For someone who had the Indian batsmen dancing to his tunes, it is rather surprising that Moeen did not get to play the second ODI. Given how well James Tredwell did in the last game, Moeen should be a shoo-in for the third match. His ability with the bat is undoubted, and one feels that he will not be hampered as much by the short ball in ODIs.

Jos Buttler: The big hitting Buttler has the fastest ODI century by an Englishman, which he got earlier this year against Sri Lanka. His explosive batting at the death can be ideal for England. His form in the Test series was terrific, and he will be looking to carry on from where he left off after missing out in the second ODI.

Chris Woakes: By far England’s best bowler in the previous game, Woakes accounted for Shikhar Dhawan and Virat Kohli in the same over before knocking out centurion Suresh Raina and India’s best death over s batsman, MS Dhoni. He is probably one of England’s best death overs bowlers at the moment, and if he can keep the Indian batsmen quiet consistently, it will boost England greatly. His batting at No 8 is also a huge boon.

Ben Stokes: Another one of the all-rounders, Stokes has the ability to bowl consistently at a good pace while getting the ball to move. He was expensive in the last match though, going at over 7.5 runs per over. However, he is likely to get another game, given that he lends some stability to the batting down the order.

James Tredwell: If ever there was an everyman cricketer, it is James Tredwell. He bowls simple, straightforward, no-nonsense, and hugely effective off-breaks that invariably get him cheap wickets. The same was true in the previous game, when he took two for 42 in his 10 overs; easily the most economical of the English bowlers.

James Anderson: The English attack without Anderson is like an assault rifle without a trigger. The leader of the attack, Anderson remains a threat given the way he consistently picked up the wickets of Dhawan, Kohli, and the other Indian batsmen in the Test series. He also scored a remarkable 81 in the first Test at Trent Bridge (the venue of the third ODI) to help save the game for England. 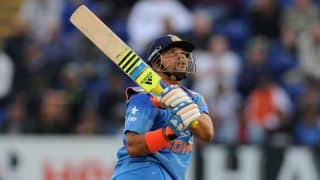