Hardik Pandya became the 12th Indian to score a fifty and take 3 wickets in the same ODI and the second to do so against England after Yuvraj Singh, who has done it thrice.

The third and final ODI of the series between India and England at Eden Gardens, Kolkata witnessed another exciting run-fest. After posting 321 on board, the English bowlers somehow managed to win the contest by 5 runs. The contest went down till the final delivery where India needed 6 to win, but Chris Woakes made sure Bhuvneshwar Kumar s swing resulted in a miss. Chasing 322, India had a poor start, followed by some good partnerships. It was the 104-run 6th-wicket stand between Kedar Jadhav and Hardik Pandya that brought hope in India s camp. Jadhav got a brilliant 90 while Pandya scored his maiden fifty. At one stage the chase looked possible, but Ben Stokes s brilliant bowling laid the foundation of England s victory. Stokes, who scored an unbeaten 57, also scalped 3 wickets from the ball. England have won the 3rd ODI but the series went 2-1 in India s favour. We present some interesting numbers from the final ODI and series. Full cricket scorecard: India vs England, 3rd ODI

Pandya became the 12th Indian to score a fifty and take 3 wickets in the same ODI and the second to do so against England after Yuvraj Singh, who has done it thrice.

Stokes also scored a fifty and scalped 3 wickets. This is the second time he has done this in his career. He became the 4th English player to achieve this feat twice after Graeme Hick (twice), Paul Collingwood (thrice) and Andrew Flintoff (thrice).

This was the 6th instance of two players of either sides scoring 50 and taking 3 wickets in the same ODI. The table below lists these instances.

Today s fifty was the 8th by Jason Roy in ODIs and 3rd against India in this series. He became the 3rd visiting batsman to hit three consecutive fifties in a three-ODI series in India, after Darren Bravo in 2013-14 and Kepler Wessels in 1991-92. Roy also became the third England batsman to score 3 fifties in a 3-match series after Graham Gooch against Australia in 1985 and Andrew Flintoff against Bangladesh in 2003-04.

With the wicket of Sam Billings, Ravindra Jadeja touched the 150-wicket mark in ODIs. He became the 12th Indian, first Indian left-arm spinner and 68th overall to reach the landmark.

Jadeja also scalped Roy s wicket for the 3rd consecutive time in this series. Roy s wicket was his 24th against England, the 2nd-most wickets by him against any team after his 26 wickets against Sri Lanka.

Besides 150 wickets, Jadeja has scored 1,878 runs in ODIs. He is the 5th Indian cricketer (and 30th overall) to do the 1,500 run-150 wicket double after Kapil Dev, Manoj Prabhakar, Sachin Tendulkar and Irfan Pathan.

With a single off Jake Ball s bowling in 6th over, Kohli completed 1,000 runs as ODI captain. He became 7th Indian captain to reach this milestone after Kapil Dev, Mohammad Azharuddin, Tendulkar, Sourav Ganguly, Rahul Dravid and MS Dhoni. Overall, he became the 65th captain to do so.

Roy, Billings, Bairstow, Morgan, Stokes and Woakes all scored above 30 during England s batting. This is the joint-most number of batsman crossing 30 in an innings, 3rd instance for England and 2nd by any team overseas. The previous instances for England came against Netherlands in 2010-11 and New Zealand in 2015. This was the 20th instance when six batsmen in a side scored 30 plus in an innings.

Kohli, Yuvraj Singh, Kedar Jadhav and Pandya all scored above 40 for India. This is the joint 2nd-most for India, 33rd such instance for India, 11th against England and 5th at home.

England scored 1,037 runs in the series the most by them in a three-match series, most by a visiting team and 2nd most by any team (after India in the this series). The previous record of most runs in a series of three matches by a visiting team was of 939 runs by South Africa against India in 2013-14.

All 6 innings in the series saw totals in excess of 300 the most in a three-match series and joint 3rd-most in any bilateral series. The record is 9, which came during the 7-match series between India and Australia of 2013-14.

India and England are the only teams to go past 300 in every ODI of a 3-match bilateral series if one ignores the Afro-Asia Cup of 2007.

This was India s 93rd innings in excess of 300 the 2nd-most by any team in ODIs after Australia (94). This was also India s 43rd such innings at home the most by any home team.

On the other hand, this was England s 51st innings in excess of 300 the 6th-most. They went past New Zealand s 50.

This was also India s 18th innings in losing causes despite scoring 300 the most by any team. India went past previous record of 17 innings by England.

Kohli crossed 50 for the 41st time while chasing the 4th-most by any batsman after Tendulkar (69), Jacques Kallis (50) and Ganguly (44). Kohli went past Chris Gayle, Adam Gilchrist, Sanath Jayasuriya, Ricky Ponting, and Kumar Sangakkara. 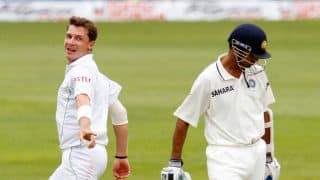 Cricketing Myths Series: Rahul Dravid in South Africa and other examples of Base Rate Fallacy