The third ODI between India and England at Kolkata's Eden Gardens was a crackerjack of a contest, keeping the roaring crowd on the edge of its seat. Let us walk through the top highlights:

MS Dhoni smiles at Virat Kohli when his captain takes an incorrect review. Kedar Jadhav hits a six and a four when India needed 16 off the last over. Ben Stokes gets Man of the Match at the same ground where he was hit for four sixes in a row. Yuvraj Singh plays a delightful pull. Eoin Morgan fires on all cylinders. Sourav Ganguly has a laugh with Virender Sehwag and VVS Laxman in the commentary box. And, above all, the match goes down to the wire. The third ODI between India and England at Kolkata’s Eden Gardens was a crackerjack of a contest, keeping the roaring crowd on the edge of its seat. Full cricket scorecard: India vs England, 3rd ODI

Let us walk through the top highlights:

Jason Roy fears Dhoni: Roy yet again was at his resounding best, scoring 65 off 56 his third consecutive half-century of the series. But here’s what had happened while he was at the crease:

As the Indian pacers are fiercely moving the ball both ways, Roy walks down the track to cut down the movement. While doing so, Hardik Pandya’s banana out-swinger beats Roy’s outside edge. Roy immediately jumps back to his crease, thinking Dhoni would take the bails in a flash. (To rewind a bit, he was stumped in the Pune ODI. Hence, he has had the taste of Dhoni’s mastery. Resume.)

But, in the moment, Roy has forgotten the fact that Dhoni is standing yards behind the stumps to pouch Pandya’s 140-kph deliveries.

Well, such is Dhoni’s genius that everyone fears his faster-than-the-speed-of-light stumping. Like.A.Boss.

Now that Kohli is at the helm, he can unhesitatingly call the shots and not depend on Dhoni anymore. He is so sure Morgan has nicked it that he signals to the umpire for a review in no time (that’s practically impossible, but such is the phrase). Dhoni, standing next to him, expresses surprise and gives a wry smile to his newly-appointed captain.

Translation: “Brother, wait. Do not take a decision in haste.”

Come to think of it, it is fun to watch such on-the-field theatrics, especially when it includes Dhoni and Kohli. If you don’t believe me, check this:

.@imVkohli, this is why you should listen to @msdhoni 😛 pic.twitter.com/ZmKCijQvWK

Now to even funnier side of the highlights.

Sourav Ganguly and his punch line: While Yuvraj and Dhoni took us down memory lane in the Cuttack ODI, we saw the trio of Ganguly, Sehwag, and Laxman in the commentary box. Let’s cut down the chase and see what happened, because most of it included Sehwag’s puns and Laxman skipping the sound of ‘h’ (for example, Ardik instead of Hardik). But this is about Ganguly:

Translation: “As a captain, I used to get a cheque. Now as the president of Cricket Association of Bengal, I have to sign cheques.”

Now that Kohli, unlike Dhoni, didn’t say a headline-grabbing line at the press conference, Ganguly’s punch line has to be the quote of the day.

Well, the laughter didn’t stop at Eden Gardens. This time it is Kohli who has fun.

Kohli laughs when a ball (not Jake the England pacer) hits Yuvraj (or hit on Yuvraj, if it is Jake): We already spoke about the track. There was swing. There was bounce, so much so that one of the deliveries took off the surface and hit Yuvraj’s chest.

Taken aback by pain, Yuvraj immediately threw his bat and walked away from the crease. At the other end was Kohli, who went to check on Yuvraj.

Given Yuvraj’s expressions, the blow appeared severe. But Kohli coolly took off his helmet. By the looks of it, it seemed he would pat on his senior’s back to console him.

But Kohli (being Kohli) laughed at Yuvraj, as if it hurt him where it hurts the most (you know what I am trying to say). But again, why would anyone laugh at this? I know he captains Yuvraj now, but should he laugh at someone who is 7 years older than him? Regardless, that’s the bond they share. Maybe Kohli mocking Yuvraj helped him move on from the pain and score a stunning 45, including a swaggering, vintage-Yuvraj-like six on the on-side.

CAB felicitates Dhoni: Cricket Association of Bengal (CAB) felicitated Dhoni for his contribution to Indian cricket as the captain.

And the crowd goes berserk: The last time MS Dhoni played a match at Eden Gardens, he was the captain in the limited-overs formats. And as he came in to bat, he received a grand reception:

Hardik Pandya’s all-round show: After taking 3 for 49, Pandya scored his maiden international half-century in the pursuit of 322 when the team was stuttering at 173 for 5.

A thriller on cards as @hardikpandya7 gets to his maiden ODI half century.Not to forget @JadhavKedar at the other end #INDvENG #TeamIndia pic.twitter.com/IidUfC5HdJ BCCI (@BCCI) January 22, 2017

Kedar Jadhav – India’s new finisher: Jadhav was adjudged Man of the Series for his remarkable performance. And at Kolkata, he almost took India over the line, but fell short by 6 runs. However, let us take a trip down. India needed 16 off the last over. Jadhav was at the crease, facing Chris Woakes. Given Woakes’ performance that night, it seemed curtains down already for India. But Jadhav, for the cool and composed cricketer is reputed for, scored a six and four, bringing down the target to 6 off 4. Nonetheless, Jadhav perished after facing consecutive deliveries, making 90 off 75.

How close was that! @JadhavKedar almost gets #TeamIndia over the line, gets a standing ovation from the dressing room #INDvENG pic.twitter.com/oVonPotPD9

But more than Brathwaite, many remember Stokes for being at the receiving end. Not that it was his fault, but England were clearly ahead in the race. And little did Stokes know that Brathwaite would pull off the unlikely.

Well, at the same ground, Stokes put up a Man-of-the-Match-winning performance to gift England their first victory after 5 Tests and 2 ODIs on this gruelling tour.

“We have waited a long time to get a win here. The Test series didn’t go very well. We forgot how (winning) felt to be honest,” Stokes said after the match. 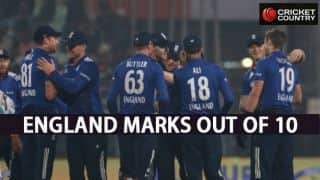