India vs England 3rd Test at Mohali: Marks out of 10 for the hosts

India vs England 3rd Test at Mohali: Marks out of 10 for the hosts

While Alastair Cook and his side will be picking pieces from what is left after this win, Virat Kohli will certainly celebrate becoming the fifth Indian captain ever to win two consecutive Tests against England.

When Parthiv Patel hit Gareth Batty for a boundary in the 21st over of their chase, India not only completed a massive victory, but also accomplished something which they could not even come close to in the last nine years. India s eight-wicket win at Mohali has given them an unassailable lead in the five-Test series against England, and looking at the way the tourists have fared in the last two Tests, a drastic turnaround in fortunes is highly unexpected. While Alastair Cook and his side will be picking pieces from what is left after this win, Virat Kohli will certainly celebrate becoming the fifth Indian captain ever to win two consecutive Tests against England. Full Cricket Scorecard: India vs England 3rd Test at Mohali.

Before the start of the third Test, England made a lot of noise about how important it was to win the toss and make a positive start. However, despite losing the toss, India dominated England in all departments at Mohali. The hosts excelled with the bat in both the innings and took 20 wickets to win the Test, and despite spilling as many as four catches. For India, the performances from Parthiv and Jayant Yadav will certainly create selection issues going into the fourth Test. But for now, let us evaluate how the Indian team fared against England in the third Test at Mohali:

Murali Vijay (4/10): The Indian opener had a poor game against England. He started off the Test series with an impressive century, but has been inconsistent following it. In both the innings at Mohali, he fell to the short-bowling ploy of England. In the first innings, he unnecessarily chased one outside off from Ben Stokes, and knowing that England could call for DRS intervention, he started walking back. Usually, Vijay watches the ball till the end and ducks on the short ball well. But in the second innings, he seemed to be taken by surprise with a snorter from Chris Woakes that took the edge and flew straight to second slip.

Parthiv Patel (7/10): The senior-most cricketer in this young Indian team, Parthiv would not have liked spilling as many as three catches. He dropped Jonny Bairstow twice during his 89 in the first innings, and in the second, he gave a reprieve to Haseeb Hameed on Day Four. However, with two strong batting performances, Parthiv can fancy playing in the fourth Test at Mumbai. Even if Wriddhiman Saha returns, Parthiv can be played as a specialist batsman. Parthiv scored 85-ball 42 in the first innings and hammered a quickfire 67 not out with 11 boundaries and 1 six in India s chase.

Cheteshwar Pujara (6/10): He has enjoyed making runs against England so far, but Mohali served important lessons to Pujara. The Indian No. 3 batsman is guilty of being dismissed for two unwanted strokes, which was totally uncharacteristic of him. In the first innings he scored 51, but failed to execute a sweep shot perfectly in the second innings and was dismissed for 25.

Virat Kohli (7/10): The face of this Indian cricket team, he did well by taking a dig in the post match interview at England s premature celebration after winning the toss. Kohli challenged England to play positive cricket before this Test, and oversaw the demolition of the team which had given his side their run for money at Rajkot. As captain, Kohli continued to surprise with some of his calls, but at the end of the day, won a Test match for India.

Ajinkya Rahane (4/10): The vice-captain nearly redeemed himself with that splendid one-handed catch to get rid of Joe Root on Day Four. Had Rahane missed it, not only there would have been further criticism, but it could also have had some impact on the final result. With the bat, Rahane continued to disappoint. In the fourth Test at Mumbai, Rahane will get the chance to score some runs on the home ground and he will be expected to come good.

Karun Nair (3/10): The right-handed batsman announced arrival on international stage with a fine cover drive for four, but was run out immediately after that. Nair did not get a chance to bat in the second innings, and he will hope to get another opportunity, preferably at Mumbai.

Ravichandran Ashwin (8/10): Sitting pretty at the top of the world, Ashwin continued to prove why he is the best among the all-rounders. His innings of 72 in the first innings and 97-run stand for the seventh wicket revived India from a perilous position.In England s second innings, Ashwin accounted for three out of four wickets which opened the door for an Indian win. He found the gap between Alastair Cook s bat and pad, which was one of the rarest instances.

Ravindra Jadeja (9.5/10): He was expected to fire in the first Test at Rajkot, which is his home ground. But the Rockstar made Mohali his own, winning the Man-of-the-Match award. Jadeja made 90 runs, took the game away from England and showed his class once again with the ball. One of the most accurate bowlers, Jadeja did not get much purchase off the wicket. Instead, he kept the English batsmen pinned at one end with tight line and lengths.

Jayant Yadav (7/10): His batting stance appears similar to Vijay s, and when he plays his strokes, one gets reminded of Ashwin. A cricketer who has a double century in First-Class cricket, Jayant proved his mettle with a fine 55 in the second innings. His innings sucked out a lot from the English camp, which started bowling ordinary deliveries to let the game drift away from them. Jayant accounted for Bairstow one of the best English batsmen on this tour and did everything to ensure he remains in the side for the upcoming matches.

Mohammed Shami (6/10): James Anderson would have been very proud of Shami s skills of landing the ball on the seam, if he had watched replays of some of his deliveries. Shami ended the game with 5 wickets in his kitty, but the highlight was his menacing spell with the new ball on the fourth day. Displaying sheer ruthlessness, Shami bounced out two England batsmen inside three balls hitting one of them on the head. Shami s control over the ball has only improved in the past few months, and his rise would have pleased the Indian team management. Shami bowled his heart out despite fielders spilling some catches.

Umesh Yadav (5/10): The right-arm bowler is also one of the most improved in the recent times. Umesh worked up a lot of pace with the new ball. With the old, he tried moving it around the batsmen. Umesh grabbed 4 wickets in the game, and was also involved in a strong 33-run stand for the ninth wicket in India s first innings. 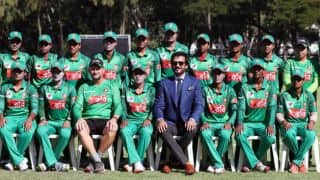 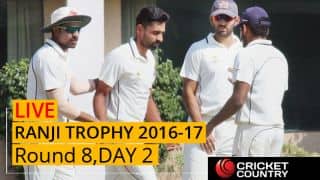