India made a horrendous start again, but recovered well in the first session and did not allow England to build partnerships, which is why they ended the day being on top.

India made a poor start to the third Test starting with the toss, which went in England s favour. On a slow deck which assisted fast bowlers in the initial stages of the match, India made string of mistakes early on before reducing England to 92 for 4 at lunch on the first day. Alastair Cook had no hesitation in declaring that his team will bat first after winning the toss, but the intent of the English batsmen remained questionable throughout the day. If Jonny Bairstow s contribution (89 runs) is taken out of England s 268 for 8 on the opening day, the tourists will not be having even 200 on the board. Full Cricket Scorecard: India vs England 3rd Test at Mohali.

Both India and England made a slew of changes. India already had a forced change in form of Parthiv Patel coming in for the injured Wriddhiman Saha, but Virat Kohli sprang a surprise when he declared that Karun Nair will be making his Test debut, replacing KL Rahul. The right-handed Rahul had injured his forearm in the Visakhapatnam Test, and aggravated the injury while training on Friday ahead of the third Test. On the other hand, England sought the services of veteran Gareth Batty once again, bringing him in place of Zafar Ansari. Chris Woakes replaced Stuart Broad and Jos Buttler came in the place of the struggling Ben Duckett.

India made a horrendous start again, but recovered well in the first session and did not allow England to build partnerships, which is why they ended the day being on top. The rotation of the bowlers was spot-on, so was the fielding set-up even though India would not have liked the results. Let us take a look at the highlights from the first day s play at the Punjab Cricket Association (PCA) IS Bindra Stadium in Mohali:

India s poor start: Once again, it was Southampton 2014 all over India. Back then on that England tour, the Indians had drawn first Test, won the second and in the third, gave Alastair Cook the lifeline which provided a boost to his Test career. On the first day morning of this Test, India continued to be erratic. Cook was given a lifeline in the third over by Jadeja, the same fielder who dropped that catch in the third Test of the 2014 series. In the 11th over, Cook got another reprieve when Ravichandran Ashwin spilled the easiest of catches at short midwicket off Mohammed Shami. There were a few instances where India were poor in fielding as well.

England crumble once again: Ever since England s defeat in the second Test at Visakhapatnam, Cook desperately wanted his side to win the toss. He had spoken about the luck factor as far as toss is concerned, and had anticipated positive show from England. The toss went in England s favour, and Cook wasted no time in announcing that his team will be batting first. But none of their batsmen showed any intent to seize initiative, and the most fidgety of them all was perhaps Cook himself. The England captain might have struck 6 boundaries in his innings, but nowhere had he looked assured of himself and his plans. After getting two lifelines, he was caught behind on the very first ball of Ravichandran Ashwin in the match.

Before that, Haseeb Hameed was dismissed for a 31-ball 9. The numbers may tell the story of another cautious start, but they will never highlight the fact that Hameed showed no intent whatsoever to make runs on a first-day wicket. England paid the price of being over-aggressive. Joe Root was needed to dig in but he fell for 15, and Moeen Ali was set-up nicely by Shami with a barrage of short balls, and was dismissed for 45-ball 16.

Jonny Bairstow stands tall: The right-handed wicketkeeper-batsman has been the best Test batsman this year, and Bairstow showed his class once again when he waged lone battle at Mohali on Saturday. Bairstow deserved a century, but Jayant Yadav cut short his innings at 89 when he got the batsman trapped in front of wickets. This was right after Bairstow had got a lifeline second in the innings from Parthiv Patel. Bairstow faced 177 balls on a wicket where every other English batsman failed to make a mark, and struck 6 boundaries to underline the richest of batting form he is in.

Parthiv Patel makes the mark: He may be 31, and playing his first Test in 8 years. But Parthiv made full use of the opportunity that came his way. Parthiv was selected over the younger wicketkeepers in the country for being the second best after the injured Wriddhiman Saha, and he celebrated the occasion with a catch behind the wicket to get rid of Cook. That catch helped Parthiv complete 50 dismissals in Test cricket as a wicketkeeper. Not to forget, by making it to the playing XI for the third Test, he also became that Indian cricketer who missed more than 50 Tests 83 to be precise before playing his next. Parthiv s glovework was good, but two dropped catches off Ashwin and Jayand were among the low points for India on the field.

Awkwardly slow final session: England resumed at 205 for 5 after tea break and it was assumed that with Buttler settled in and Bairstow having struck his 13th fifty, the tourists will continue to bat more positively. But surprisingly, the first hour saw not more than 20 runs being scored, and England losing Buttler for 43. There was no intent to make runs for a very long time, and on their part, India kept moving around their bowlers and fielders to strangulate run-scoring. The run-rate, which was at around 4 in the morning, dropped below three in the final session with Bairstow looking to rotate the strike more and Chris Woakes dropping the anchor.

No Bhuvneshwar, but Umesh and Shami impress: Knowing that Mohali has one of the best seaming wickets in India, the hosts stuck with the pair of Umesh Yadav and Mohammed Shami for the third Test. Unfortunately, once again Umesh and Shami did not get the support and success which they deserved completely. Both the right-arm bowlers bowled their hearts out, but as many as four dropped catches in the day summed up India s readiness for the occasion. Shami set up Moeen Ali well to have him caught off a short ball, and Umesh tested Hameed early on with movement early on. 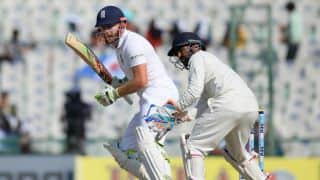